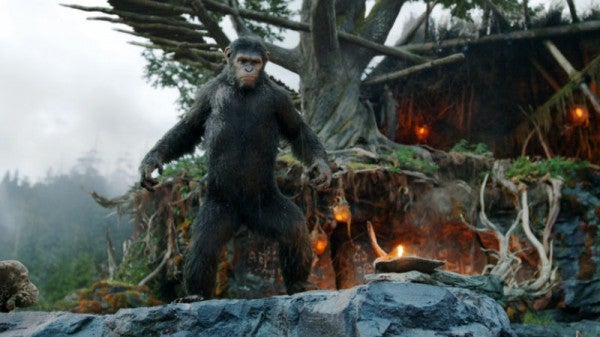 This photo released by Twentieth Century Fox Film Corporation shows Andy Serkis as Caesar in a scene from the film, “Dawn of the Planet of the Apes.” AP

LOS ANGELES – Newcomer “Dawn of the Planet of the Apes” clambered to the top at US and Canadian silver screens, edging out the “Transformers” epic, industry data showed Sunday.

The “Apes” saga, based on the Pierre Boulle sci-fi tale of humans and chimps clashing to survive, had a smashing debut, raking in $73 million, according to industry monitor Exhibitor Relations.

That pushed “Transformers: Age of Extinction” to second place with $16.5 million – or $209 million in three weeks.

The massive morphing robots epic was the first movie of the year to open with $100 million on the domestic front.

Another blockbuster summer sequel, “How to Train Your Dragon 2,” came in fifth with $5.9 million.

Family-friendly sci-fi “Earth to Echo” was in sixth place with $5.5 million in earnings.

It was just ahead of horror flick “Deliver Us From Evil,” which had $4.7 million in ticket sales, in seventh place.

Angelina Jolie’s “Maleficent,” a modern retelling of the life of Sleeping Beauty’s arch-nemesis, grossed $4.2 million for the weekend for eighth place.

“Jersey Boys,” Clint Eastwood’s film adaptation of the hit Broadway musical about the 1960s rise to pop success of Frankie Valli and the Four Seasons, was in 10th at $2.5 million.

TAGS: cinema, Dawn of the Planet of the Apes, Entertainment, Movies