Stars say it with T-shirts 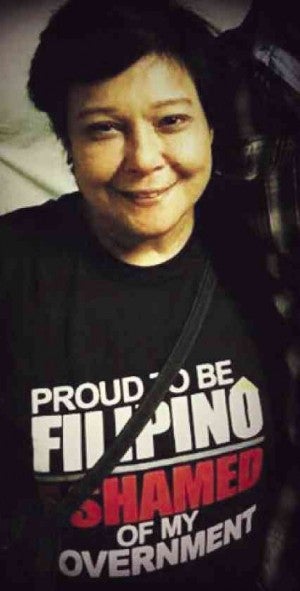 AUNOR. Message says it all.

One of our pet notions is that the ordinary T-shirt has evolved from being just a piece of clothing, and has become the modern-day equivalent of the “sandwich board” of yore, which was used to advertise restaurants, products and such.

This time, however, what T-shirts “advertise” aren’t just products and services, but—more creatively—slogans, advocacies, witty sayings, what the wearer thinks is important and should be visually shared with others—etc.!

Thus, some T-shirts and the messages printed or stenciled on them provide a sort of verbal and visual mural of personal and societal concerns, the stuff of which our shared existence is made of!

Since T-shirts can’t carry a lot of information without coming off as a verbal jumble, the people who think up the messages on them have to distill  their thoughts and feelings into short, crisp and quotable bits or bytes, the better to get a clear and instant reaction—and response.

These thoughts come to mind at this time, because Nora Aunor has just made a public appearance wearing a T-shirt pointedly bearing a message expressing her thoughts after she was “presidentially” passed over as National Artist. The message says it all, even as her brave smile belies it.

Also quite recently, we saw another photo of “Showtime” host Vice Ganda wearing a shirt with the word “corruption” cryptically emblazoned on it. At first, the cryptic nature of the message may appear to be perplexing but we immediately connect it with the political controversies currently exercising the populace—and the single word is quite enough!

These two instances of celebrities “speaking” by way of their T-shirts have prompted us to initiate a search for other examples of stars who “talk” in the new “T-shirt language”—and the quest has proven to be instructively fruitful, as some of the other pictures on this page show:

Lady Gaga reminds everyone with her “Climate Revolution” shirt that we should reduce our individual carbon footprints, to mitigate the disastrous effects of climate change.

Elizabeth Banks is a spokesperson for the Malaria No More Campaign, hence her T-shirt’s message: “Mosquitoes suck because they spread Malaria!” Mila Kunis campaigned for Barack Obama wittily and subtly by way of her “Barack the Vote” shirt.

For his part, Marc Nelson boosted the Earth Hour campaign with his shirt’s “Lights are off” message. The hosts of “It’s Showtime” wore pro-gay shirts to show their support of the LGBT community. And, “speaking” more personally, Eva Longoria made clear her aversion to intrusive paparazzi with her “I want more privacy!” shirt.

Say it with T-shirts!