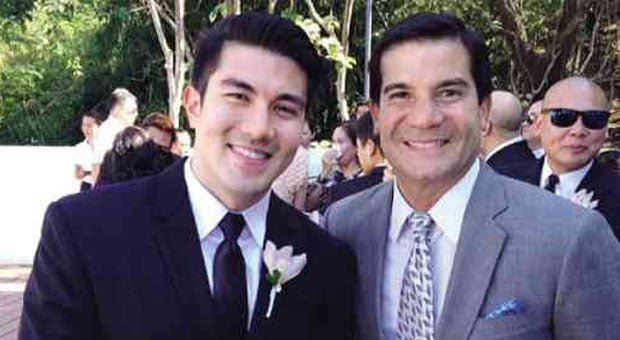 Television host-actor Edu Manzano would rather not meddle in son Luis’ personal life—whether it’s about his political aspirations or marital plans—but said that he’d continue to support him in his endeavors.

“Luis is already 33—he can do whatever he wants with his life,” Edu said of his son, who had earlier expressed interest in running in 2016 as mayor of Lipa City, Batangas. The position was held by his mother, Vilma Santos, who now sits as the governor of the province.

In a recent interview with “The Buzz,” Luis said that he had been discussing the matter with his mother, stepfather Sen. Ralph Recto, and girlfriend, actress Angel Locsin, adding that he would be arriving at a decision in two months.

Edu has no problem with Luis entering politics. But as someone who’s had experience in that world, the actor-turned-politician cautioned his son about the sacrifices that go into public service.

“If you choose to serve the people, then that should be the focus of your existence,” Edu told reporters at a recent press conference for the TV5 talk show, “Face the People.”

Edu served as vice mayor of Makati City from 1998 to 2001; and as chair of the Optical Media Board from 2004 to 2009. He also ran for vice president of the Philippines in 2010, but lost to Jejomar Binay. “I want Luis to realize that being a politician is not easy,” he said. “Running a local government, in particular, requires more personal interaction with the people.”

He added that Luis should be conscious of the responsibilities he would be juggling as an actor-politician. “Maglalagare siya. It’s up to him if he wants to quit show biz,” Edu said.

But beyond that small piece of advice, Edu rarely brings up politics when he’s with Luis—or his two children with model Rina Samson, Addie and Enzo, for that matter.

“It’s hard enough to bring all of them together. So the last thing we want to talk about is our country’s problems,” Edu said. “We just want to enjoy our time.”

There is talk that Luis plans to tie the knot with Angel in the near future. Asked about his thoughts on the rumor, Edu said: “My kids don’t want to talk about their love lives. But of course I will always support them. Parents have no right to meddle.”

As for his own love life, Edu, who insisted that he is single, said he doesn’t see himself getting married again. “No, happy na ako. My kids and I get to travel together.”

He expressed an interest in doing indie films, though. Edu said that director Wenn Deramas is also cooking up a project for him and Luis. “I’m interested in working with my kids. We’ll see.”

But for now, Edu said he will be focusing on his hosting duties in “Face the People” (Monday to Friday, 10:15 a.m.), with hosts Gelli de Belen and Tintin Bersola-Babao.

“In the show, I’ll inject some humor and give a male perspective on the issues,” he said.

Though he sometimes gets shocked by the guests’ problems and situations—usually involving illicit affairs—Edu said that it was important for him to go out of his comfort zone.

“The program’s concept is entirely new to me. But I know that to be a multi-faceted host, I have to do different things,” he said.