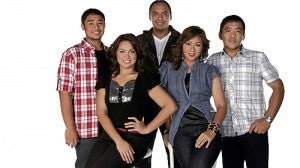 Contestant Art Mendoza, who used to weigh 341 lbs., said his biggest fear is to gain the weight he lost during his four-month training inside the “Biggest Loser Pinoy Edition” camp.

Art, one of five finalists competing for the title of The First Pinoy Biggest Loser, now weighs 236 lbs.

“When I got out of the camp (located in General Trias, Cavite), I knew I wouldn’t be able to spend four to five hours of gym time, but I was able to change my lifestyle,” Art said during a media gathering on Tuesday held at the ABS-CBN compound in Quezon City. “I make sure to work out for an hour and a half every day.”

He admitted he’s been big since he was a kid. “For two or three years I was fit. Those were the times when I played football in the United States. But I wasn’t as fit as I am now. After that, I gained more. Two months before the competition, I even weighed 360 lbs.”

Before the contest, Angela, who used to weigh 233 lbs., said she already accepted the fact that she would always have weight issues. “I even said I’d die fat. But in the camp we were taught that there’s hope for people like us, that to achieve our ideal weight, we just need to focus and be determined,” said Angela, who now tips the scale at 155 lbs.

“Biggest Loser” is based on the franchise that first became popular in the US. The show starts with a weigh-in that serves as the baseline for determining the overall winner. The contestants are separated into two teams of six contestants, each wearing separate colored T-shirts.

Various challenges and temptations are featured in the episodes. Those who win the challenges are given special privileges, such as a weight advantage for the next weigh-in, or full immunity from being voted off the show. The teams are dissolved when the number of contestants has shrunk to a predetermined smaller number. The contestants then compete against each other.

“When I decided to join, my goal was just to lose the weight,” said Hazel, who used to weigh 206 lbs. “I guess when it rains, it really pours. I’m contented with what I have now. I can’t ask for anything more.” Hazel, who now weighs 150 lbs., has also found her first boyfriend in the camp—Raffy.

“I’ve never been this happy about how I look,” said Raffy. “I already weighed 170 lbs. when I was in grade 6. I gained more through the years until I reached 220 lbs.

He added that he’s “experiencing many firsts these days. For the first time, I can go to a shopping mall and buy clothes for myself that are not extra large, double X or even quadruple X.” Raffy now weighs 207 lbs.

Larry, a former police officer, said he left the force because he lost his self-respect. He was at 255 lbs. during the initial weigh-in. “I had a lot of vices. I was a heavy drinker. I blame myself for what happened to my body.” Now he steers clear of temptations. “I’m working on changing my life. You’ll never know, maybe I could go back to being a policeman again soon.” He is now down to 170 lbs.

When asked if they could fall in love with somebody with weight problems, Eboy gave the most interesting response. “I don’t think looks is a factor. I’ve also experienced rejection from someone because of my weight problem,” he said. “I sometimes think of meeting that person again just to say, ‘look at me now!’ There’s somebody for everyone.”

Art added: “I was married before, but was separated last year. I’m a believer that beauty is in the eyes of the beholder. Fat or thin, as long as she’s beautiful for me, it really doesn’t matter.”

Like Hazel, Joy said she has been “single since birth. I’ve met quite a number of chubby people since the show. I believe ‘pag malaking tao, malaki rin ang puso. It doesn’t matter if he’s fat or thin as long as we get along well. I’m so jealous of Hazel. Nakatyamba siya!”

The winner will be announced during the grand finale on Oct. 8 at the Ynares Stadium in Pasig. At stake: P1 million, a newly furnished condominium unit from DCMI Homes, a Vespa scooter, a 40” Sony Bravia Internet TV, Whirlpool appliances and a lifetime membership from Fitness First.

Read Next
Heard: A scene from Willie Nep’s concert
EDITORS' PICK
Been there, done that but what’s the difference between MECQ and GCQ?
Smart 5G goes live
A gem of a residence in the new normal
Water remains our saving grace right now
BREAKING: 3,226 latest COVID-19 cases bring PH’s total to 106,330
PNP: Checkpoints back in MECQ areas
MOST READ
MECQ guidelines in infographics
Health workers decry colleague’s death from virus; accuse gov’t of neglect
Lacson takes up cudgels for health workers ‘threatened’ by Duterte
MECQ in NCR, other areas: Mass transportation suspended, quarantine pass required anew
Don't miss out on the latest news and information.