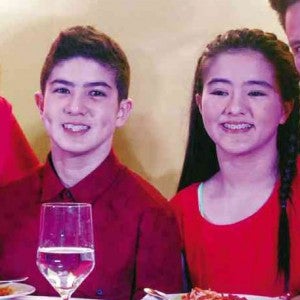 Zoren Legaspi had a black eye when he showed up at a recent press launch with his family.

Zoren jokingly replied, “Hayaan mo silang manghula.” Turned out, he got the shiner from an accident during a basketball game.

The Legaspi family is perceived as perfect in real life—thus, they have landed several endorsement deals. But the show biz couple denied the perception.

“However,” Carmina said, “though Zoren and I may bicker at times, we’ve never had major fights.”

Zoren added: “We try not to be conscious about being in the limelight because, the moment we are, everything becomes fake.”

Their 12-year-old twins Maverick and Cassandra, Carmina continued, are the same, on- and off-camera: “What you see is what you get. We don’t have to pretend… we’re just a typical family.”

As in any normal family, the children are punished when they misbehave.

Cassandra, or Cassy, said her “Tatay” grounded her once for spending too much time online.

“I was on the phone all the time, and not working on my singing, dancing and other productive activities, as I should,” Cassandra said. “I was banned from visiting social networking sites like Facebook and Instagram.”

Zoren said it was only after a year of warnings, that he finally disciplined his daughter.

“Cassy is a good girl,” he said. She’s doing very well in school.”

On the other hand, Maverick, or Mavy, was scolded for riding his bike around the subdivision without permission. Although he was not banned from doing it, he was made to realize how risky it was.

“I went biking alone. Anything could have happened, even inside the subdivision, which made me realize that I should have sought permission,” he said.

Zoren said each member of the family could point out someone else’s mistake.

“There’s no hierarchy, that’s the technique. When a child is wrong, the parents must correct his or her mistake. Similarly, when a parent is wrong, any of the kids can point it out,” Zoren said.

Zoren and Carmina encourage their kids to engage in more physical activities, and spend less time fiddling with gadgets.

“When the twins were younger, we didn’t expose them to gadgets. It was only when they turned 8 and someone gave them a gaming console that they [started playing] with those things,” Carmina said.

Cassy is now learning how to play volleyball, while Mavy is into basketball.

As for going into show business, the parents said it would be up to the twins to decide. So far, the siblings do not seem interested.

“I enjoy acting and love performing. It’s fun to do those things… but I love school, too. Education is very important,” Cassy said.

Mavy agreed. “I want to finish school first and [go on to] college. We’ll see from there.”

Carmina will be working on a teleserye soon, while Zoren will be directing a project for a coming film festival. Meanwhile, he is also dealing with a tax evasion case. He said the whole family is kept abreast of everything.