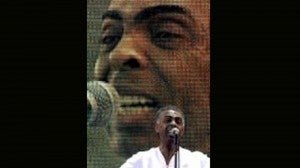 Brazilian popular singer and former Culture Minister Gilberto Gil, sings during the opening of the music festival Rock in Rio, in Rio de Janeiro, Brazil, on Dec. 12, 2001. Rock in Rio, the world's biggest music festival, is to kick off on September 23 with Rihanna, Shakira, Coldplay and Lenny Kravitz sharing the billing. AFP FILE PHOTO

RIO DE JANEIRO—Rock in Rio, the world’s biggest music festival, is to kick off Friday in the city of its birth, with Rihanna, Shakira, Coldplay and Lenny Kravitz sharing the billing.

Tickets to the week-long event have been snapped up by 700,000 people who will crowd into a specially built “City of Rock” that is to be the site of the future Olympic Village when Rio hosts the 2016 Olympic Games.

“Rock in Rio is to Brazil what Woodstock was to the world,” one of the organizers, Roberta Medina, said.

Other artists to belt out tunes at the festival include Elton John, Stevie Wonder, the Red Hot Chili Peppers, Jamiroquai, Metallica, Maroon 5, Guns N’ Roses, and Brazil’s top singers such as Ivete Sangalo.

While still the biggest event of its kind on the planet, the size of this year’s Rock in Rio is half that of its first edition in 1985, when a staggering 1.4 million people attended to see AC/DC, Iron Maiden, Rod Stewart and — to great enthusiasm — Queen.

Rio’s organizers plan to hold more editions closer together in the future, already confirming Rock in Rio festivals for 2013 and 2015.