A new ‘itch’ for Mitch 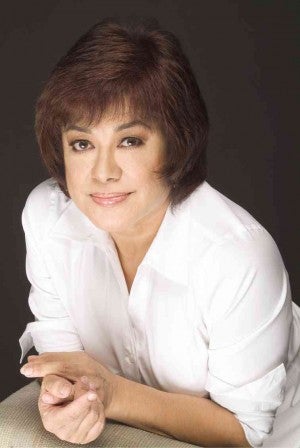 Sitting down with singer-actress Mitch Valdes for a chat about her latest movie, “Overtime,” one assumes she is playing the mom, or aunt, of one of the lead characters, played by Richard Gutierrez and Lauren Young.

While that must hurt, it also underlines the fact that substantial roles for women of a certain age are difficult to come by in local cinema.

Turns out, Valdes’ role in “Overtime” is quite interesting.

“I play a retired policewoman who, in her active years, encountered sexism in the workplace,” she relates. “She never got to prove herself, having been relegated to looking for missing children and dogs.”

And then, once retired, “she witnesses a sensational crime,”

Many women will find her character’s predicament relatable, Valdes says. “I thought about the dilemma of most senior citizens: Is there more to life? I also have those moments. Is there nothing else I could do in this business?”

She agrees that the youth-obssessed entertainment industry’s demands can be stifling.

“But you can’t give up. You must keep jumping to the next project, and the next,” she stresses. “I keep repeating this in workshops that I give (for the talents of the Philippine Gaming Corporation) … I urge them to keep pushing themselves.”

She reminds the youth of the importance of stepping outside their comfort zones. “Don’t listen only to Top 40 hits. Don’t watch only commercial movies. Check out indie and foreign film festivals,  go to museums, watch stage plays, read books.”

The best way to feed one’s art is to “absorb the art that’s all around you,” she says. “When you open your mouth—to sing or to act—all these flavors, textures, nuances will come out.”

These days, Valdes is invigorated by the indie film scene.

It all started, she recalls, when she agreed to join the cast of Sigfreid Barros Sanchez’s “Huling Biyahe,” an entry in the second Sineng Pambansa in 2012. “I wanted to help out the young director because his goal was to gather all the former cast members of (the 1980s gag show) ‘Champoy.’”

“Huling Biyahe” proved to be the initiation drug that got her hooked on acting again. Last year, she appeared in Emmanuel Quindo Palo’s “David F.,” an entry in the New Breed section of the Cinemalaya Philippine Independent Film Festival.

Valdes points out, “The indie scene is the closest to the theater experience. An artist doing an indie film feels the freedom. You are not limited by commercial considerations.”

She recently acted in a studio film, Viva’s “Diary ng Panget,” and will next be seen in GMA Films’ “Overtime,” which opens July 2. 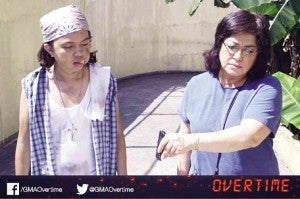 MITCH Valdes gets to work with young comic Roadfill (left) in “Overtime.”

In “David F.,” she plays a former bar girl who has a son with an African-American serviceman. It is an older, more weathered and jaded version of her 1976 cabaret performer in Lino Brocka’s “Lunes, Martes, Miyerkules, Huwebes, Biyernes, Sabado, Linggo.”

“I thought it hilarious that I tied with a bomba star. But when I watched her film, I was impressed. It just goes to show that a good director can bring out the best in a talented performer,” notes Valdes.

She made history as Urian’s first Best Supporting Actress winner, but after the awards show, “I took a cab, with my trophy.” It was a sobering reality check.