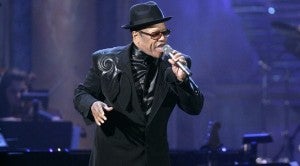 In this April 4, 2009 file photo, Bobby Womack performs after being inducted into the Rock and Roll Hall of Fame during the 2009 Rock and Roll Hall of Fame Induction Ceremony, in Cleveland. Womack, 70, a colorful and highly influential R&B singer-songwriter who impacted artists from the Rolling Stones to Damon Albarn, has died. Womack’s publicist Sonya Kolowrat confirmed to The Associated Press on Friday, June 27, 2014, that the singer died but had no other details to provide. AP

Womack penned a string of R&B staples including “It’s all Over Now” — which went to number one for British rockers The Rolling Stones and “Lookin’ for A Love.”

Rolling Stones star Ronnie Wood was among the first to pay tribute to Womack, tweeting: “The man who could make you cry when he sang has brought tears to my eyes with his passing.”

“RIP to the ‘Soul Legend’ who sang from his Soul !!!” added US rapper MC Hammer.

Womack started out performing with his brothers in the 1950s and later a band called the Valentinos. He also wrote songs and played guitar for artists including Aretha Franklin and Wilson Pickett.

Sonya Kolowrat, a spokeswoman for his label XL Recordings, confirmed his death to Agence France-Presse, but said she had no further details. Womack’s main home is listed as Los Angeles.

Womack, who was credited with influencing generations of acts, was inducted into the Rock and Roll Hall of Fame in 2009.

He struggled with drugs and health problems for decades, but released a comeback album, “The Bravest Man in the Universe,” in 2012, his first record in over a decade.

Although he had long had health woes, he was due to go on tour in Europe next month — his website listed shows in the Netherlands, France, Belgium and Britain in the second half of July and start of August.

From family band to solo star

Womack was born in Cleveland, Ohio to a musical family, forming The Womack Brothers gospel group with his siblings, managed by their father.

But their career took off when they were signed by Cooke to his label Sar Records and renamed The Valentinos in 1962, producing their first hit single, “Lookin’ for A Love.”

Womack still played with his brothers, but also began playing guitar in Cooke’s own band. After Cooke died in 1964, the Valentinos floundered, and Womack launched his solo career.

Some of his biggest hits were songs written for other stars, including Pickett, Franklin, Joe Tex and Dusty Springfield.

In the early 1970s he recorded hits of his own, including “That’s The Way I Feel About Cha” and “Woman’s Gotta Have It,” but his fortunes waned later in the decade, according to the IMDb show business database website.

But he made an appearance on “Plastic Beach,” a 2010 album by British Blur veteran Damon Albarn’s “virtual band” Gorillaz.

That fueled his comeback: Albarn co-produced “The Bravest Man in the Universe,” which was widely critically praised.

When he was inducted into the Rock and Roll Hall of Fame, he said: “My very first thought was I wish I could call Sam Cooke and share this moment with him.”

“This is just about as exciting to me as being able to see Barack Obama become the first black President of the United States of America!” he said, according to Rolling Stone, which first broke the news of Womack’s death.