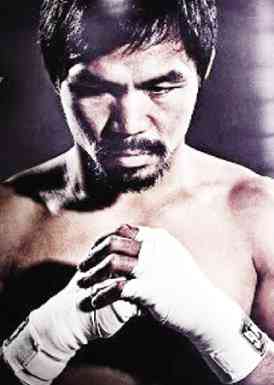 THE BOXING champ is tickled pink by recognition for the docu.

The nearly two-hour docu directed by Ryan Moore and Leon Gast and narrated by Academy Award-nominated actor Liam Neeson landed in the 12th slot of the 15 best films exhibited in the 2014 Little Rock Film Festival (LRFF) that ran from May 12 to 18 in Arkansas.

“It’s a story that plays like a feature film, with a role that Pacquiao himself would probably want to play,” Basham wrote in the music and entertainment online magazine Paste, published by Wolfgang’s Vault.

The critic sounded amused by the pugilist’s “embarrassing” attempts at singing.

Moore himself earlier said “Manny” depicts the Pinoy ring legend’s weaknesses as a human being and his down-to-earth character.

After watching a pre-exhibition screening in Los Angeles in April, the boxing champ was quoted as saying, “That’s the real story of Manny Pacquiao.”

Basham noted, “The film also shows Manny’s ability to laugh at his mistakes and smile through difficulties. It ends where his career stands today, with periodic discussions of a match with world champion, Floyd (Mayweather) Jr.”

Pacquiao is elated by his movie’s achievement at LRFF. “I hope it serves as an inspiration to many people, especially children,” he told the Inquirer on Wednesday.

The festival was founded by Little Rock natives and documentary filmmakers Brent and Craig Renaud. This eighth edition showcased a diverse lineup of 100 films (from a pool of more than 1,000) from 30 countries. Aquiles Zonio, Inquirer Mindanao

Cayetano tags Velasco in ouster plots against him