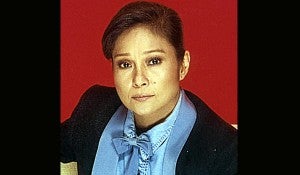 MANILA, Philippines – The National Commission for Culture and the Arts (NCCA) has denied that it is protesting the non-inclusion of actress Nora Aunor in the new roster of national artists.

In a letter made available to Palace reporters, NCCA chairman Felipe de Leon Jr. clarified that they were just sad at the results and that it was the press’ “penchant for media hype (that) led them to gross exaggerations.”

“Your Excellency, the NCCA and CCP (Cultural Center of the Philippines) fully respect your authority to exclude any nominee for the award if it is in the national interest,” De Leon wrote in a letter addressed to President Benigno Aquino III.

“Indeed we are happy that we have a new set of national artists,” he added.

De Leon lamented that “passions and tensions are running high” and that “media snoops and scribes have gone overboard with their investigations and reporting of the circumstances regarding the awards.”

“The thrill of the hunt has caused them to lose restraint and respect for the truth in their accounts,” he added.

The NCCA official claimed that his expression of sadness has been interpreted to mean “vehement objection” or “slamming” of Malacañang’s decision.

“None of these were stated by NCCA or any of its officials,” he said.

The NCCA at CCP are also set to meet “to forge a unified stand” on the issue.

De Leon said NCCA or its affiliated agencies would never disrespect the President.

Of the six names recommended by the NCCA and CCP, only Aunor was not approved by Aquino as national artist.

Malacañang has insisted that the President’s decision was based on national interest and that he need not explain his decision.