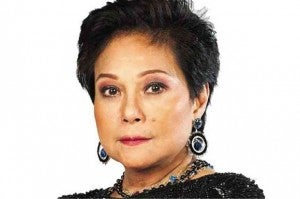 MANILA, Philippines – Bicolano lawmakers in the House of Representatives demanded an explanation from President Benigno Aquino III for purportedly snubbing their fellow Bikolano Nora Aunor in the roster of National Artists.

Aunor (real name Nora Cabaltera Villamayor) was included in this year’s nominees for national artists by the Cultural Center of the Philippines (CCP) and the National Commission of Culture and the Arts (NCCA).

But she was allegedly dropped by Aquino, who has the power to proclaim all or none of the recommended artists, by reasons that remain unknown as of press time.

Reports have surfaced that Aquino dropped Aunor allegedly due to the actress’ purported drug abuse history.

In a statement, Ako Bicol Rep. Rodel Batocabe said the President should explain the alleged snubbing of Aunor to “erase doubts upon the fairness of the President’s decision.”

“Her not being on the list despite of her obvious qualification is what makes the whole exclusion unacceptable and merits an explanation, considering that the award is greatly imbued with national interest,” Batocabe said.

He said Aunor has been awarded with 110 nominations and awards in the country and abroad since 1967.

“That’s 47 years of dedication and diligence contributed to the development of Philippine Culture and Arts…” Batocabe said.

“She deserves to be on that list,” he added.

The representative urged the chamber to hear their resolution urging President Aquino, the CCP and NCCA to declare Aunor a National Artist.

According to House Resolution 973, Aunor “inspired millions of Filipinos with her humble beginnings as a water vendor on the famed Bicol Express train in Iriga City, to a multi-awarded artist as an actress and singer…”

Also, the partylist started an online petition in Change.org urging President Aquino to proclaim Nora Aunor as a National Artist.

“This is not just Aunor’s fight, we Bicolanos are surely behind her 100 percent of the way,” Batocabe said.