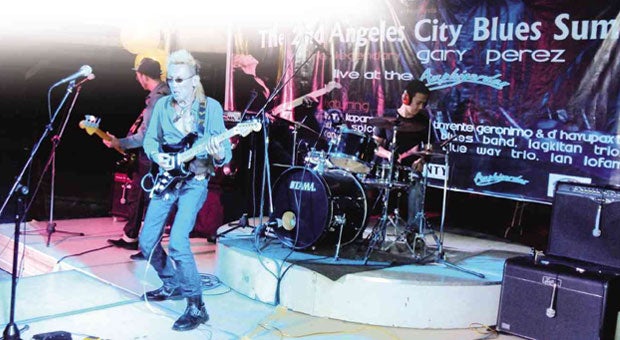 While Native Spice, Bottle Talk and Tibuan gave tight, creditable performances, the veteran D’ Hayupax Blues Band, with Tenyente Geronimo Dino Dollente on guitar and vocals, was particularly engaging as it displayed the free-wheeling, fun side of the genre.

Gary Perez relived his halcyon days as a rock star, blowing the dust off of old Anak Bayan and Sampaguita favorites.

But the night belonged to Ian Lofamia and his band, whose lively stage persona and wide range of blues chops on the harmonica simply amazed listeners. Ably supported by Arvin Austria on lead guitar, Haro Echter on lap steel guitar, Spencer Rymonte on bass and Ejae Mercado on drums, the young Lofamia displayed world-class mastery of the blues harp.

It was the second offering of Angeles Blues Exponents Productions Unlimited (ABE-PU) after last year’s equally successful summit that headlined Wally Gonzalez, and musician-organizers Angelo Long and Dino Dollente were pleased with the outcome.

“We started the summits to spread blues consciousness in Angeles’ mainstream music scene, and to provide a venue for blues musicians and enthusiasts,” explained LUID MK guitarist Long. “We are targeting the youth, to raise their appreciation of the blues. And slowly but surely, bands and guitar players without bands started looking for a venue.”

Indeed, the city has apparently caught on, with venues in the five-block entertainment district getting blues-friendlier, notably Suave’s, Palitos, Miss Magic and the Amphitheater. “It’s still a young, evolving scene compared to Manila’s, but it’s exciting, eclectic and a lot of fun,” Long enthused.

Impressed with the event’s staging were the head honchos of the Philippine Blues Society, Tom Colvin and Elwyn Zalamea, who came with a large contingent of blues fans from Manila. “It was, quite simply, an amazing event—well-organized and nicely staged,” said Colvin.