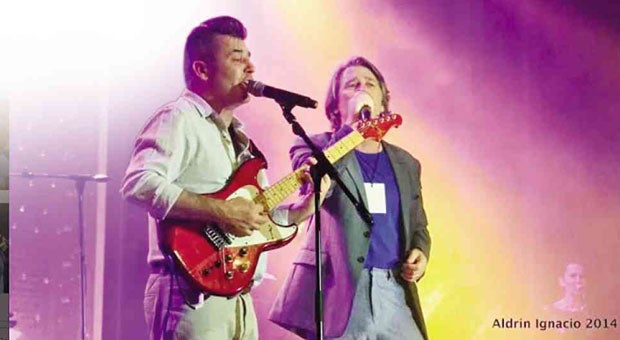 China Crisis cofounder and vocalist Gary Daly expressed appreciation for returning to Manila for a fourth time during his spiel at the English pop-new wave group’s show at Solaire’s Grand Ballroom Friday night.

“[It’s] our pleasure to be here,” Daly said, before singing his fourth song.

Kudos Loves 80s, a young band with Union Jacks painted on half their faces, led with a medley of new wave favorites from the era and the early 1990s.  “Enjoy the Silence,” “Catch Me, I’m Falling,” “Pretty in Pink,” “I Go Crazy,” “Tenderness” and “Just Like Heaven” were given a moodier, heavier take, heralding a throwback to simpler, more melodic musical epochs.

At 9:12, Mark Mabasa and Friends, a quartet of young pop-R ‘n’ B crooners, went onstage. The switch in genres was jarring to those expecting a purely new wave-y night. The group did a couple of retro numbers: “Baby, Come to Me,” “Dance With My Father Again,” and songs from the soundtracks of “Dreamgirls,” “The Bodyguard,” “Rent” and “Footloose,” among others.

Mabasa is clearly talented and charming, and his group mates awe-inspiring singers, so a sizeable part of the audience was won over, unmindful of the sudden detour.

China Crisis emerged at 10, opening with the lively “A Higher High,” followed by numbers where Daly and guitarist-cofounder Lundon shared vocal duties.

Backed by a younger band, they sounded a bit different, a tad more adventurous than some of their recordings, but less-wrangled and focused, instrument-wise.

During Daly’s spiel of gratitude, a female fan yelled, “Black Man Ray,” requesting one of the group’s biggest hits, to which Lundon replied, “Soon!”

China Crisis, named for “the mystique and mystery of the East,” as the core members previously told the Inquirer, offered evolving styles in its heyday, and even after. The reggae-influenced “Strength of Character” had a lively bounce, an interesting deviation from their more guitar- and keyboard-driven ditties.

Immediately after, they played “Black Man Ray,” a poignant ballad that sent diehards singing along: “Yes, yes, I could be wrong/why, why should I pretend/God only knows in the end.”

It was followed by “Tragedy and Mystery,” “Working With Fire and Steel” and “Best Kept Secret”—distinctly playful nostalgia inducers. Daly dances with a suave, Bryan Ferry-like demeanor, holding a mic with his right hand while his left rested on his hip. (Young ones were probably reminded of Hugh Grant’s parody-dancing in “Music and Lyrics.”)

Daly and Lundon, heftier now in their early 50s, parted ways with their slimmer selves a long time ago, but the energy and charisma remained. “Christian” was still solid and lilting; “King in a Catholic Style (Wake Up)” still characterized subversiveness and verve. “Stranger by Nature” was light and pretty sultry. It was surprising that it was about Daly’s firstborn daughter, now 27. Prior to that revelation, he sang it to a young back-up singer like he was serenading her.

After the anthemic “African and White,” one of their earliest hits, came the much-awaited “Wishful Thinking,” which prompted those with recording devices to whip them out and save the moment. Midway, Lundon encouraged the audience to sing along, and many did. Sadly, that was the last song; they didn’t even get to do an encore (not even the 1994 song “Thank You”). Talk about wishful thinking.

Nonetheless, it was a good, hour-long set worth the patience-testing wait, and a sturdy enough show that made unperturbed China Crisis fans happy and heady.