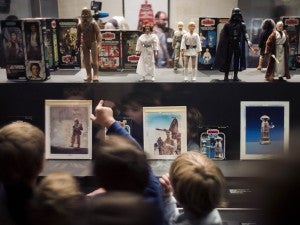 Children look at Star Wars toys displayed during an exhibition at the Arts Decoratifs Museum in Paris. AFP FILE PHOTO

ANTIOCH, California — A Mexican citizen suspected in the killing of a man who tried to pay a debt with Star Wars action figures has been deported.

Rojas was arrested earlier this year in the San Francisco Bay Area in connection with the slaying of Carlos Palomares Maldonado.

Federal officials say Maldonado owed criminal associates of Rojas about $3,000 and offered to settle the debt by trading his collection of Star Wars figures that were apparently worth more than the debt.

Authorities say Maldonado disappeared after going to Rojas’ home in Mexico with the figures in September. Federal officials say his body was later found in the possession of several people who implicated Rojas.

‘Star Wars’ fans to get chance at cameo