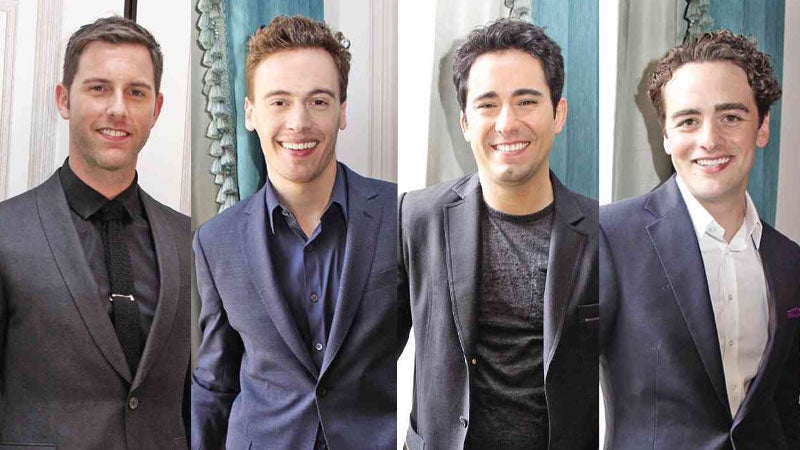 LOS ANGELES—Most actors who work with Christopher Walken end up having their definitive moments with the cool, iconic thespian. In Clint Eastwood’s film adaptation of the hit stage musical, “Jersey Boys,” Christopher plays a mobster boss, Gyp DeCarlo whom The Four Seasons—played by John Lloyd Young (Frankie Valli), Erich Bergen (Bob Gaudio), Vincent Piazza (Tommy DeVito) and Michael Lomenda (Nick Massi)—are forced to turn to for help. Gyp, who adores Frankie’s singing, ends up considering himself as a mentor to the boys as they rise in popularity.

In the film’s final scene, the cast, including Christopher, break into a rousing version of “Oh, What a Night.” We just wish this number showed more of Christopher dancing.

In separate recent interviews in New York, we asked the four actors (all have played the same roles in various stage productions of “Jersey Boys,” except Vincent Piazza) to share their memorable moments with Christopher on the set. They broke into pretty good imitations of Christopher’s voice and accent as they quoted what the revered screen figure said to them.

Mr. Walken is just too cool. We had just found out that we were going to add in this finale number, “Oh, What a Night.” Originally, it was just the four lead guys, then it kept growing, because Clint kept on saying, “What if we had everyone come back in?” Sergio (Trujillo, choreographer) kept going, “Alright, I’ll choreograph them, too.”

I walked up to Mr. Walken, knowing he’s a singer and dancer, and said, “So, you’re going to be coming back and doing the song with us.” He looked at me and went (imitating Christopher), “What song?” I was thinking, ‘Oh, God, they haven’t talked to him about it yet.”

I was ready to die. I walked over to Clint and said, “Have you not talked to Mr. Walken yet about being in this song?” Clint said, “No. We’re not sure if he wants to do it.” I was about to say, “I just asked him…” and all of a sudden, Mr. Walken came up to us and was like (imitating Christopher again), “I hear there’s a song.” I was ready to jump out of the window.

It was like, “Oh my God, I’m going to get fired! This is the end of my career.” Christopher Walken and Clint Eastwood were standing between me, and I was thinking, “What is my life? How did I get here?” It was the weirdest moment.

On the last day of our film shoot, we shot outside of Frankie Valli’s childhood home. They had the police tape, and the barricades up. The residents of this block were standing behind the police tape. I walked on the set. They don’t know me yet. They were just excited to see a movie being shot. Clint Eastwood walked on the set, and they were excited.

But, when Chris Walken walked in, they went wild! He is so famous and has such a cool profile that people go at him a lot. He keeps to himself and is very reserved. He’s great to work with and a nice guy.

I got towels embroidered with names on them for everybody who was involved in the sit down scene, because my character was obsessed with (Tommy DeVito’s hotel room) towels (piling up) on the floor. So, Mr. Eastwood and Mr. Walken and everyone else got them. Mr. Walken didn’t say anything about it to me for a couple of days.

So, finally, I said, “Hey Mr. Walken, did you get those towels?” His full name is Ronald Christopher Walken. I found that online. It turns out that he was mortified that I had found out information about him online.

He stood up and told this story about how he had once said something about a neighbor (that ended up being reported online). He seemed upset about the fact that it had gone out there because of this “insidious” Internet and that you could really find anything online. He wasn’t pleased about that, so he said, “Just watch what you say.”

I am a big cinephile, so I got to watch a lot of Christopher Walken movies when I was growing up. He came in when we were already 20, 30 days into shooting the film. We already had a routine. We had shorthand with the crew. I know, as an actor—I had done a lot of small parts, where I would come in and you don’t know everyone’s name. You don’t have that kind of familiarity.

But, I watched Christopher Walken so gracefully come in, size up the situation very quietly, then boom, he went right into his work. That was one of the great things I learned from him.

In one of the first scenes he shot, he was disciplining these two guys (Tommy DeVito and Nick Massi). I am like the bubblegum gangster. I got a big wad of chewing gum, and I was blowing bubbles. I had a lot of takes that you didn’t see—I was just blowing bubbles—pop, pop, pop.

In one of the takes, he just looked at me and went (imitating Christopher), “Tommy, the gum!” It was one of the great moments when I was like, ‘Oh my God!’ I just took the gum out of my mouth, put it behind my ear and went on with the scene. He kept it in the context of the scene. It was a fun moment!