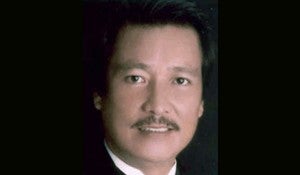 The senator said he has been longing to revive “Leon Guerrero,” a horse-riding local Robin Hood who merited a box office hit and at least two sequels at the tills.

“I choose this character because he wears a mask.  It’s good for hiding wrinkles,” said Lapid, now 56.

The senator said he was inspired by Schwarzenegger’s recent move to star in the latest “Terminator” franchise after retiring as governor of California.

Lapid, himself a former Pampanga governor, said he would not wait until the end of his term in 2016 before producing and starring in this movie.

The senator envisions a revival of the Manila Film Festival traditionally held at the last week of June. Only this time, it would host only action films.

The festival was scrapped after the so-called 1994 film scandal where results were switched to make Ruffa Gutierrez and Gabby Concepcion win instead.

Lapid said this effort would be a tribute to all the stuntmen and film extras saddled with unemployment during these hard times.

“I remember earning only P15 a day as a stuntman in 1975.  They raised this fee now to P500 but if you shoot a film for only one day in a month, that would not be much,” the senator said in Filipino.

“Action is easier to do.  But it can’t stand the competition of comedy and fantasy films that require special effects.  It’s actually the special effects that raise production costs,” he noted.

Lapid said he would rather that each rugged actor star in his own film.  He said a smorgasbord like “The Expendables” which starred Schwarzenegger, Sylvester Stallone and other Hollywood big names would be unimaginable in the Philippines.

“Pataasan ng ihi (There would be a peeing contest, intense competition), there would be difficulty in the billing,” he noted.

Revilla and Estrada however, were cool to Lapid’s idea.

Revilla called the idea a “very good proposal” but said the play date would coincide with the school opening, which usually made for poor box office results.

Estrada said he would rather focus on lawmaking, adding that action films would take time to shoot.