IN THIS photo taken before the show, the weather is perfect at Fraze Pavilion—the skies are a bright blue with sunshine and a few clouds. SIMON CHALK/TWITTER

RALEIGH, North Carolina —Last Sunday night we performed at the Fraze Pavilion in Kettering, Ohio. The Fraze is an open-air venue, with an unobstructed view of the skies above.

At 7:30 p.m., when the concert began, the skies were a bright blue, the sun shining brightly although there were a few clouds. The weather started taking a turn for the worse about an hour later.

Backstage, I sat with Stuart Merser, our resident tech guy. He had the Weather Channel website on his laptop, monitoring the skies. A storm was heading our way, the skies looking more and more threatening with each minute that passed. The forecast wasn’t looking good, with his screen showing more clouds coming in from the southwest.

At the beginning of Act 2, we could see flashes of lightning. Urs Buhler shortened his speech to get as much music played. During my solo set, I did the same, hoping that I could get all my solos done and out of the way.

Unfortunately, singing my “I Dreamed a Dream/On My Own” mash-up to completion wasn’t meant to happen. The rain started to come down and I could hear the wind whipping in my microphone.

One of our hosts from the Fraze Pavilion came out to announce that the show had to be halted. All the Divos then came back onstage for a final bow, accompanied by apologies and expressions of thanks. We all then headed backstage, got dressed out of our show clothes and headed to our hotel.

Apparently, backstage, as I was performing, there was a storm of decision-making taking place as well… to continue, or not to continue… but once the weather had really taken a bad turn, it was unavoidable. We had to stop the show.

I later found out that it was the first time in Il Divo’s 10-year history that one of their concerts had to be stopped, for any reason. I guess the unexpected still happens, despite a long 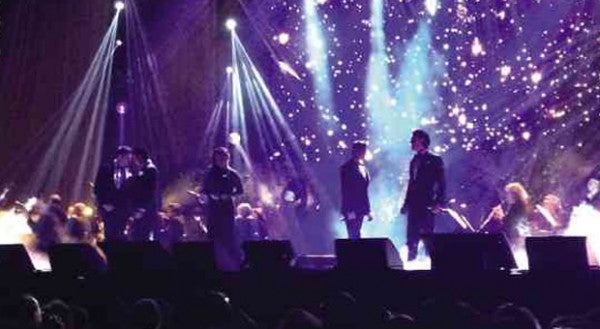 EVEN a well-oiled machine like the “Il Divo” tour can encounter bumps on the road. CHARMAINE PROSPERO/FACEBOOK

Expecting the unexpected is part and parcel of live performances. Despite all safeguards to ensure that shows go as smoothly as intended, bad stuff happens. The stoppage could be caused by a set piece breaking down, an actor being injured, or something else going on.

During our final dress rehearsal for “Miss Saigon” in London, a cable from the Ho Chi Minh statue jumped a drum, making it roll much farther forward than it was supposed to. Two rows of actors were marching in front of it, toward another set piece that was already in place. The actors were now standing on their marks, but the statue was nudging—then pushing—them forward.

They all ran from their marks as the statue kept rolling, save for one young woman who couldn’t get out as quickly. Luckily, the fast-acting and very strong stage crew members were able to keep the statue from hurting anyone, and the young actor (Shukubi Yo, now a voice teacher in Japan) was saved from injury.

The decision was made that evening that our first two previews would be canceled and that we’d add two more dress rehearsals: One just to test the safety of every single set piece and another to run the full show.

At a matinee performance of the same show later on in the run, Keith Burns (Thuy) and I were onstage playing a scene in the first act when the thick red curtain slowly came down. We both looked up and wondered what was going on. Stage management informed us that there was a bomb threat at the theater, and everyone—actors and audience—had to evacuate immediately.

I was dressed in T-shirt and trousers, so I didn’t have to change. All the actors were assembled across the street from the stage door and we saw members of the audience similarly situated.

I saw Jonathan Pryce (who played The Engineer) in his black dressing gown and various company members standing, waiting. Once we were told it was okay to reenter the theater, we headed back inside and picked up where we left off.

At the Singapore run of “They’re Playing Our Song,” the automatic revolving stage decided to quit working. I was onstage alone when my costar Adrian Pang suddenly appeared and ushered me off the stage. The set must have been halfway to somewhere or something, irretrievably caught in a place and couldn’t be saved. The mechanism under the stage couldn’t be fixed, not that evening anyway. I don’t think we got to the second half of the show that night.

The Manila production used a manual revolving stage, so we never had this problem.

However, we did have a snafu of a different kind. Michael K. Lee, the replacement for Adrian Pang in “They’re Playing Our Song,” had an extremely abbreviated rehearsal period for his put-in, so he was going through a very stressful time with us.

His first performance went smoothly, but at his second one, we encountered a few sound issues with his microphones; we couldn’t hear or understand anything he was saying or singing. Well, it turned out that, because he was perspiring copiously, he blew out both his body mics. That’s right, both of them. If I remember it right, we had to stop the show to equip him with replacements. At intermission, he came by my dressing room to apologize profusely.

Throughout a performer’s career, there will be many of these stops taking place. Many of them will be forgettable, while others will be remembered forever that they end up as battle tales told over dinner, over drinks, or written about in newspaper articles like this one.

One can’t ever really adequately prepare for them, except to take the occasional halt as just one of those things that are part of the job. All you can do is laugh and take it on the chin.

After all, how does one battle Mother Nature when she decides to literally rain on your parade?