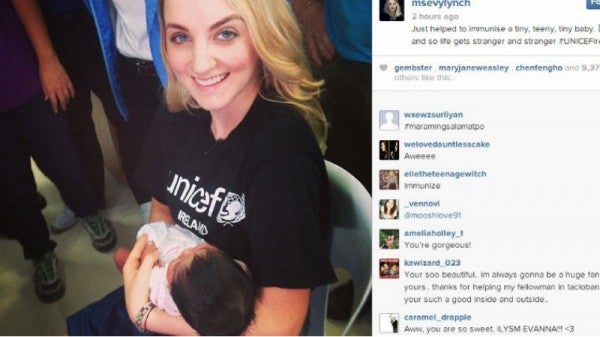 MANILA, Philippines—Evanna Lynch, who played the character of Luna Lovegood in the popular Harry Potter films, spent three days with the children of typhoon-hit Tacloban together with United Nations Children’s Fund (Unicef) Ireland.

As a “high profile supporter,” she arrived in the Philippines on Monday and joined officials of Unicef Ireland as part of the organization’s “Voices of Children in Emergencies” campaign.

The young actress posted on Instagram photos of their activities, from visiting children in bunkhouses and Unicef tents to assisting in the immunization of babies.

Upon landing at the airport, Lynch said the countryside was “so pretty.”

“Life has been beautifully simplified here and everywhere people are united in their efforts of restoration. Feeling very lucky to be a part of what the UNICEF Ireland team are doing here,” she said.

“Just met the UNICEF team in Tacloban and am SO excited to work with these beautiful people,” she posted on Twitter on Monday.

Another photo showed a young girl learning how to handle a camera.

“Vanessa is 14 years old and president of the youth group. She survived the typhoon and is the brightest, kindest young girl I’ve ever met. She wants to be a photojournalist so our videographer, Darragh gave her a go,” Lynch said.

The latest photo shows her smiling while cradling a baby with the caption, “Just helped immunize a tiny, teeny, tiny baby.”

Unicef Philippines told INQUIRER.net that Lynch’s visit will end on Wednesday. She and members of Unicef Ireland spent the last three days learning more about the organization’s efforts to help in the recovery of children in communities devastated by Super Typhoon “Yolanda” (international name Haiyan).

Unicef Philippines over Twitter quoted Lynch saying, “Education is the only way out. I’ve met many parents here, education for their kids is their only dream.”