MANILA, Philippines–Parents, please don’t set your kids in the wrong direction by allowing them to watch the concert of the British pop boy band One Direction in March next year.

Better still, the government should ban the group from coming to the Philippines.

This was the appeal made Tuesday by Fr. Conegundo Garganta, executive secretary of the Catholic Bishops’ Conference of the Philippines (CBCP) Episcopal Commission on Youth, as a video showing two of the band members smoking what appeared to be marijuana circulated online.

“Do not lead them in the wrong direction… Be discerning on where you are leading your children,” advised Garganta, who also heard the news that some parents had gone out of their way and braved long lines to buy VIP tickets, which cost P17,950 each. 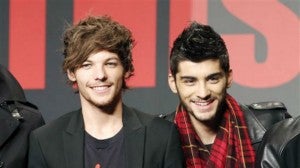 This Nov. 3, 2013 file photo shows One Direction members Louis Tomlinson, left, and Zayn Malik during an event for their film “One Direction: This Is US,” in Makuhari, near Tokyo, Sunday, Nov. 3, 2013. AP

Thousands of Filipino fans camped outside SM Mall of Asia Arena in Pasay City late last month for the advanced selling of tickets for the band’s concert on March 21, 2015.

“Even if they don’t hear any warning from us, the parents themselves must already act, especially when they see that the people whom their children adore are not being good role models,” Garganta told reporters on the sidelines of a weekly forum hosted by the Catholic Media Network.

“Parents should have the capacity to lead their children in the right direction,” he said.

The leaked video showed One Direction bandmates Louis Tomlinson and Zayn Malik smoking what appeared to be marijuana.

The other members of the band are Niall Horan, Liam Payne and Harry Styles.

The young band catapulted to popularity after generating hit singles that include “Live While We’re Young,” “Story of My Life” and “What Makes You Beautiful.”

Garganta also urged the government to ban the British boy band from traveling to the Philippines and perform to “protect the minds and senses of Filipinos from being poisoned.”

The British press reported that the band might be banned from touring the United States just like British star chef Nigella Lawson, who has been accused of being hooked on cocaine.

Antidrug advocates earlier proposed that before the band could be allowed to perform in the country, its members should undergo a drug test.

Antinarcotic agents were also urged to monitor the band while they are performing onstage to ensure that they are free from the influence of drugs.

“But the government must already make a move before all these measures could take place,” Garganta said. “The government should not only ban the group, it must make a statement because if you are for your people, would you allow your people to be poisoned?”

“From the start, you will have to cut the ties that will put your people in a bad state,” Garganta said.

He also said that the country was already struggling with “too many poisons” to deal with another one.

“So we better put a stop to this. We can ban them from staging a concert here,” the priest said.

Garganta said that local organizers must also be discerning in picking foreign artists to perform in the country.

“I don’t think our local organizers would like to promote young people who are stoned,” Garganta said.

He said there were other groups or bands popular among the youth not because they “had flipped or are stoned.”

NGO: No drug test, no PH entry for One Direction