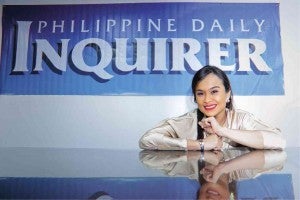 THE ACCLAIMED actor (at the Inquirer office) says his family and friends in Davao are ecstatic every time he lands in newspapers.

(In the runup to the Gawad Urian on June 17, the Inquirer will turn the spotlight on some nominees.)

Unable  to get a cab, Mimi Juareza took a tricycle to the Inquirer office in Makati, in the heat of summer.

He said he had to do his own makeup for the Inquirer pictorial because his regular stylist was stuck in a taping at GMA 7. 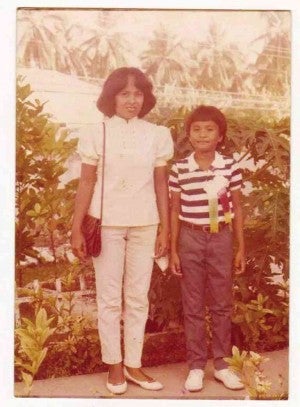 NORLITO was close to his mom as a kid. “Even then, I knew it.” Photo by Jilson Seckler Tiu

“I still consider myself an ordinary person,” he said. “When strangers ask to have their photos taken with me, I get embarrassed. I am usually the one who runs after stars to have pictures taken with them. I never thought this would happen to me.”

In fact, his first priority for the Urian awards show on June 17 is to be photographed with acting royalty and Best Actress nominees Nora Aunor and Vilma Santos.

He admits to being a Noranian, not just because he also has a mole on his left cheek like his idol.

“A critic commented that, if you close your eyes, I was like Nora Aunor in ‘Quick Change.’ Wow! What a huge compliment… to be compared to Nora Aunor…even though the critic had his eyes closed,” he quipped.

Scanning the list of fellow nominees in the Urian gave him pause, though.

“Nakakatakot. I got nervous. They’re all good: Joel Torre, Sid Lucero, the Medina brothers (Alex and Ping), Mark Gil, Jhong Hilario. Then someone made a comment on Facebook: How come there’s a girl in the Best Actor category? My picture was included in the lineup…Hindi na lang ako nag-react.”

He recalled that he had received a slew of criticisms after he won Best Actor in last year’s Cinemalaya and accepted the trophy in a long flowing gown. 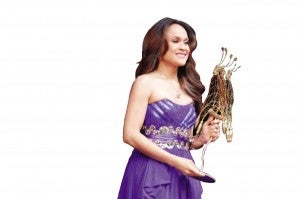 MIMI has no problem being declared Best Actor at the Cinemalaya Awards. ARNOLD ALMACEN

“There were a lot of haters in social media. They said I shouldn’t have accepted the award for Best Actor,” he recounted. “In my opinion, it doesn’t really matter what category they put me in. What’s important is that they noticed and valued my work in ‘Quick Change.’”

The indie film was all the more special because it was the fulfillment of a childhood dream, he said.

“I’ve always wanted to act, even as a kid growing up in Davao,” he owned up.

He was a fan of the youth TV show “That’s Entertainment,” he confessed. “I would sleep with magazines featuring my idols on the cover: Romnick Sarmenta, Sheryl Cruz and Manilyn Reynes.”

After 10 years of working as a singer in Japan, he never imagined he would soon join his idols on the big screen. “I already forgot about that dream. I thought I was already too old. I thought it was impossible for a transgender to penetrate show business.”

Mimi is keenly aware that transgenders face an uphill climb in the biz, that meaty and substantial roles like his part in “Quick Change” don’t come every day.

He considers himself lucky because after winning Best Actor in Cinemalaya, he received offers to guest in GMA 7’s “Magpakailanman” and TV5’s “Positive.”

“Whenever I get TV assignments, I ask the staff: Why did you get me? They tell me that they saw ‘Quick Change,’” he remarked. 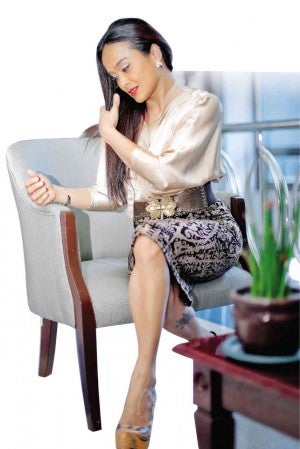 Mimi takes all this in stride.

“My mom and friends in Davao are more thrilled. Every time, I get written about in newspapers like the Inquirer, they go crazy. Para silang loka-loka. They run in the streets, knocking on the doors of neighbors, screaming: Mimi is famous!”
Same person

One high-school friend got in touch with him online after Cinemalaya. “I didn’t put my real name on Facebook. He knew me as Norlito Bayaton. He couldn’t believe that Mimi and Norlito were the same person. When I left Davao, my hair was close-cropped and I had a mustache!”

Now, he’s quite a leggy stunner.

“But even then I knew…when I look at my old photos, even as a kid, my projection was different.” Pang-beauty queen.

That same serene, regal demeanor he put to good use during a recent trip to Hong Kong where he got held up in immigration for three hours. “I think they have an issue against transgenders.”

In spite of the hassle, Mimi diplomatically and eloquently told the immigration officers: “I am an invited guest of the Hong Kong International Film Festival. I had an event at 11:30 a.m. and it’s already 2 p.m.”

And he had another red-carpet event at 3 p.m.

Without a minute to spare, Mimi did his makeup in the bus and changed to his white lace gown in a toilet at the hotel’s lobby.

The organizers advised him not to change clothes anymore. Adamantly, Mimi exclaimed: “No! Sayang ang hairdo at makeup.”

Speaking of which, Mimi hopes to try something different on the Urian red carpet.

“I already wore a gown at the Cinemalaya.  For the Urian, I’m thinking of wearing a tux…a feminine suit,” he enthused.