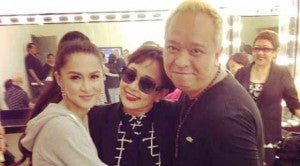 Guess who dropped by on the set of “Marian,” the new dance-musical-variety show top-billed by Marian Rivera (left) on GMA 7?

Marian’s special guest in the pilot is Batangas Governor Vilma Santos. Marian hit it off with Gov. Vi while shooting “Ekstra.”

According to director Louie Ignacio (right), the two dancing queens’ production number in the new show, which is tentatively set to debut on June 22, is fabulous. Bayani San Diego Jr.