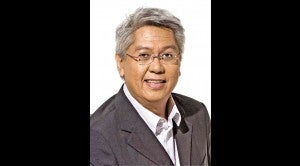 MANILA, Philippines—The Catholic Church and some of the country’s top artists are raising funds to rebuild 20 chapels and churches in Samar and Leyte flattened by Supertyphoon “Yolanda” last year.

Caritas Manila, the social service arm of the Archdiocese of Manila and composer Ryan Cayabyab are set to stage a benefit concert dubbed “Rise! Rebuilding from the Ruins” on June 11 at the newly restored Manila Cathedral in Intramuros, Manila.

At a press briefing on Friday, Manila Archbishop Luis Antonio Cardinal Tagle said there were other ways to raise funds for the reconstruction of the churches but Caritas Manila chose to collaborate with Cayabyab because “sublime, noble and spiritual things are best expressed in art.”

He added that the reconstruction of the world and even its salvation on the human level depended so much on artists, who can lead people to “deep truths” that serve as the foundation of civilization and a community that understands justice, truth, love and communion.

“Those things cannot be taught by ideology … those can only be expressed by artists,” said Tagle.

The concert, which will showcase Cayabyab’s wide repertory of sacred music compositions, aims to generate at least P20 million in ticket sales, priced at P5,000 each, according to Caritas Manila executive director Fr. Anton Pascual.

These churches and chapels are expected to be finished by the end of the year in time for Pope Francis’ visit to the Philippines in January 2015.

No tuition hike for Yolanda-hit schools

‘Bulk of Yolanda budget not yet released’