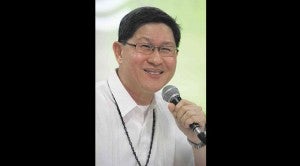 TAGLE. Open to perspectives that shed light on issues

“The Church is a church of salvation, not damnation.” This was the reaction of Manila Archbishop Luis Antonio Cardinal Tagle to a suggestion of some his confreres to excommunicate politicians and legislators who were involved in passing the controversial Reproductive Health (RH) Law.

In an exclusive interview with EWTN’s news director, Raymond Arroyo, over “The World Over Live” program last May 23, Tagle said he was very cautious about the language of excommunication. “I believe excommunication happens in very strict circumstances. You have to judge levels of culpability on a personal level,” he explained. (Tagle was in the US recently and said Mass at the Catholic University of America in Washington DC, where he earned his doctorate in Sacred Theology.)

It was along this line that Tagle spoke of the Church’s teachings on the family, one of the issues to be tackled in October this year at the Extraordinary Synod of Bishops on the Family, where he was named one of three presidents. When asked by Arroyo if it was possible to envision a policy that would allow Catholics to divorce and remarry without an annulment in relation to Christ’s teaching on the indissolubility of marriage, the cardinal said the teaching of Christ and the Church on marriage will not be changed.

“But, it would be difficult to say that all marriages that end in divorce are the same. Every failed marriage is quite unique, because when you deal with divorce or annulment, you deal with persons. In the Philippines, there’s a pending reform in the annulment process, because some people claim the canonical procedures are too rigid,” he pointed out.

“Of course the synod will not focus only on this situation. For example, in the Philippines, we don’t have divorce. If the whole synod is only about divorce, maybe we should call for a synod for countries with divorce laws. But in our country, we have couples who live separately, not because they want to or they’re angry toward one another, but because they’re separated by poverty and migration.”

Still on the synod, Tagle clarified the context of a statement cited by the Boston Globe quoting him that he was “open to hearing arguments as to whether Catholics can divorce and remarry without an annulment, to receive communion and other sacraments.” He explained that what he meant was that he was “open to perspectives that will help bishops shed light on the issues.”

Turning to the state of the Catholic Church in the Philippines, Arroyo asked Tagle if there was a crisis in vocations in the country, owing to its “exportation” of priests to Europe and other countries, and how the cardinal was able to expand vocations to the priesthood in his former diocese of Imus, Cavite. Tagle admitted that Filipino Catholics are used to having only one priest for a big parish.

“It’s commonplace,” he says. “What saves us, though, is the fact that many of our priests are relatively young—and there’s great participation of the laity.   In Imus, I think my contribution would be, whenever there were feasts, I always included in my homilies, sometimes jokingly, a call to a priestly or religious vocation.”

On a lighter note, Arroyo asked Tagle’s reaction about his monicker, “the Asian Pope Francis,” because of his simple way of living, availability, and ability to mingle with the public. Wearing a radiant smile on his face, the cardinal quipped, “I smile but I don’t take the monicker seriously—Pope Francis is Pope Francis!”