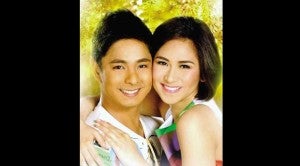 MARTIN AND GERONIMO. Forced chemistry in “Maybe This Time.”

We have always greeted Sarah Geronimo’s multimedia endeavors with enthusiasm and encouragement—from her films to her albums and concerts. After all, the so-called Pop Star Princess is the premier singing actress of her generation, the way Nora Aunor and Sharon Cuneta were in the ’70s and ’80s. And, even within her “manufactured” environment, we’ve noted her slow but steady growth as an artist.

But, “Maybe This Time,” her predictable and humorless big-screen pairing with Coco Martin, is a setback that puts everyone involved in Jerry Lopez Sineneng’s distended production in an unflattering light. It hits one discordant note after another, because everything about its leaden narrative feels fake and fabricated—including its lead stars’ forced chemistry.

Sarah looks ill at ease as Stephanie Asuncion, a PR specialist whose job is to turn Anton Bugayong (Martin), the jologs (uncool) boyfriend of her stunning but shallow boss, Monica (Ruffa Gutierrez), into the sophisticated man-about-town he isn’t wired to be. Her much-awaited promotion rests in the modern-day male Galatea she needs to carve out of Monica’s fiancé!

Alas, he turns out to be the Tonio who broke her heart (and, indirectly, her father’s legs, too—but, that’s another fantasticating side story) seven years ago! Upon Monica’s insistence, the seaman-turned-caregiver is getting reinvented after inheriting 40 million bucks from his generous Italian employer—! Suddenly, Steph is torn between the promotion she badly needs and the man she’s still in love with. —What to do?!

To be fair, Sarah displays flashes of her evolving thespic maturity, especially in her schmaltzy confrontations with the appropriately cast Coco—who, in turn, is compromised by his kneejerk emotionalizing, which feels too calibrated to be fully empathetic.

Sarah may have grown as an actress through the years—and, indeed, she hits her mark when she doesn’t hold back—but, she also regresses when her burgeoning confidence isn’t handled well, as this film vividly demonstrates. This time, she is as self-conscious and tentative as the clipped and calculated English lines she is required to intone.

The ravishing Ruffa is another casting casualty: She is far too tall for her own good—and a little too “mature” for both Sarah and Coco. When she figures in shouting and shoving matches with them, she looks like an aunt who’s scolding them for breaking their curfew! In her Lavinia vs Dorina moment with Sarah, we wouldn’t have been surprised if she squished her impertinent rival for getting on her bad side!

Ironically, the best things about the film are its theme song (performed by Sarah, natch) and the Tagalog tongue twister, “Minekaniko ni Monico ang makina ni Monica” (the cleverly delivered gag had us rolling in the aisle)—but, what does that say about the rest of the movie?

And, after the ruckus created by the shameless product placements of “My Little Bossings” at the MMFF last year, it doesn’t help that this rom-com includes deliberate sequences that allow its mismatched lead actors to plug their respective commercial endorsements. Surely, Star Cinema and Viva can do better than this.