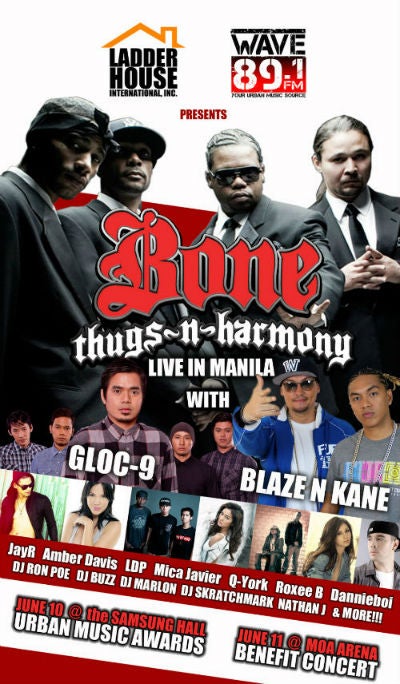 Fans are all excited and wouldn’t want to miss them performing live in the country on June 10, 7 p.m. at the Samsung Hall SM Aura Premier.

The renowned hip hop group is also set to perform in a benefit concert on June 11 at the SM Mall of Asia Arena. Part of the proceeds of the benefit concert will be donated to the rehabilitation of cities in Leyte which were devastated by Typhoon Yolanda. Producers of the annual awards ceremony have visited the following cities last May 21.

Every year, Wave 89.1 holds the Urban Music Awards for their outstanding achievements in the Philippine Urban Music Industry. It is dedicated to honor and showcase the biggest names and emerging talents in the country’s hip-hop and R&B music industry.

Some of the awards include Best New Artist, Best Male R&B Artist/Best Female R&B Artist, Club DJ of the Year, Best Rap Artist, among others. The ceremony will also feature performances from well-known artists such as Gloc-9, Blaze N Kane, Jay-R, Q-York, and many more; highlighted by a special production number by Bone Thugs-n-Harmony.

About the Urban Music Awards

The Urban Music Awards is the highest music honor in the Filipino Urban Music Community which has been celebrated since 2010. The show is produced by Marcelle John Marcelino (H-Town), Leo Iruke, and Sammy Park and will be broadcasted from the Samsung Hall SM Aura Premier on Tuesday, June 10 at 7 p.m.