A treat of three 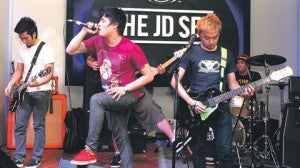 We finally caught a performance of the Jack Daniel’s JD Set club tour on Friday night at Craft in Bonifacio Global City, Taguig—to see how the local indie bands in the lineup would fare.

There were three groups that night, each with their own distinct style and appeal. The five-member Blue Boy Bites Back played with intensity, channeling punk with a dash of thrash metal and pop. Opening with a fast-paced number called “Batong Bituin” (wordplay on “rock star”), then continuing with a tune that blasted out noise like gunfire, the band spewed emotionally charged lyrics which, they said, were based on personal experiences.

We were impressed with the arrangements, which the band tackled as if its young members were veterans.

“We’re serious about music, we hope to last for a long time,” said vocalist Paolo Castro.

The second band, Playphonics, is from Tacloban, with a female singer who also writes its songs. Its music stood out for its moody, atmospheric sound.

The guitars, in particular (played by Hector Cruz and Dandee Grafil), was exceptional in its exploration of different tones. The bassist, Carl Solite, pumped some R&B and jazz grooves.

But while the description came close, there were elements in the band’s songs that likewise revealed tension and disturbed feelings. “Kawawang bukas, kawawang mundo,” Billano sang, sounding alarmed at the world’s troubles, even as she ended on a positive note.

Billano’s vocals had a dreamy quality, and there were moments when she seemed entranced by the songs’ lyrics.

Kelevra, the third band, was like a well-oiled machine and played so tight that the crowd was momentarily dumbfounded.

Its grunge/alt-rock sound rang with power chords so infectious that we couldn’t stop bobbing our head.

The band’s frontman, JM Godinez, was totally in command of the stage, his vocals delivered with conviction and clarity, although we had difficulty understanding most of the lyrics (just like the other two bands) due to the venue’s faulty audio system.

“I want people to feel good after listening to our songs,” Godinez said, explaining that the band’s first three numbers, “The Rush,” “The Fold” and “The Majestic,” were interconnected.

All three bands have something valuable to say in their music. JD’s sponsorship is helping them reach out to an appreciative audience.

We wish the clubs wouldn’t allow smoking inside. We can’t afford to suffer in silence and end up with cancer from second-hand smoke sooner or later.