From ‘Hulk’ to gay activist 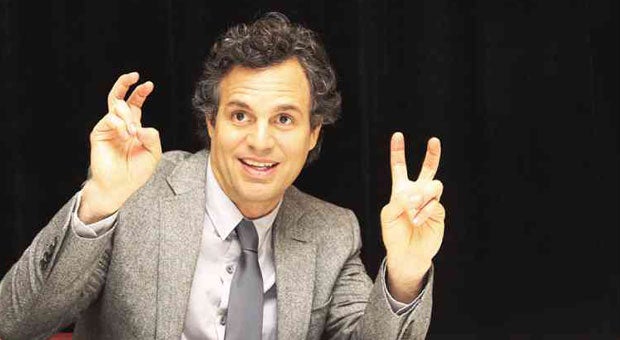 LOS ANGELES—“Can you see my a**hole?” Mark Ruffalo recalled asking “The Normal Heart” director Ryan Murphy as the actor got ready to shoot a sex scene with Matt Bomer. “The camera was somewhere that I couldn’t see.” He couldn’t see Ryan, either, so he expressed this “main concern” aloud. Smiling now, in a recent New York interview, Mark quipped, “Because I don’t know if it’s ready for photographic display.”

Ned is based on Larry, who took action and became a vocal advocate when a mysterious new disease started decimating the gay community. Matt’s Felix is a New York Times-style reporter who contracts AIDS.

(Also in the cast of “The Normal Heart” are Julia Roberts, Jim Parsons, Taylor Kitsch and Alfred Molina.)

Of his kissing scenes with Matt and his take on the opinion that, in this age, it should no longer preoccupy media, Mark said, “I don’t know if it’s fascinating—maybe because people secretly wonder. But yeah, it was even a little bit of a moment for me. I had never kissed a guy before—what was that going to be like? My wife (Sunrise Coigney) was like, ‘Okay, Mr. Actor, you make out with these ladies all the time. Now we are going to see how good an actor you really are.’”

Dapper in a gray suit (salt-and-pepper hair becomes him), Mark added, “I have to say [that], while I was kissing Matt, the one thing that went through my mind was, wow, it isn’t that different from kissing a girl, except for the whiskers. That was a little tough because the whiskers were chafing my skin. I finally realized why my wife likes to make out with me when I am clean-shaven.”

Then, breaking into a big smile, Mark said, “Now, my wife knows that I’m a good actor.”

Mark, an activist in real life (one advocacy of his is opposition to fracking, a mining technique) disclosed that he had a question for Ryan when the latter offered him the role: “I asked him, ‘I am honored that you came to me… but don’t you think we are at a time now when a gay man should be playing this part?’ He said, ‘You are missing the whole meaning of the movie. It doesn’t matter if you are straight or gay; what matters is that you are the right actor for the part.’ That’s what this is ultimately about. And that’s a big thing.”

Mark came of age in the late 1980s, very much the milieu that “The Normal Heart” is set in. He related: “I was 18 when I moved to Los Angeles in 1986. There was a lot more information 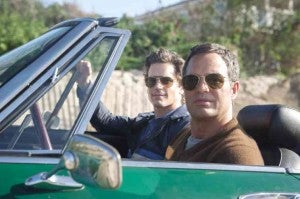 about AIDS and that was when I was becoming sexually active. There was still a lot of fear and disinformation [and] no real strong governmental research guidelines. At that point, you still thought you could get AIDS by kissing. So there was hysteria, a fear around AIDS that my generation was experiencing, and it was clear that it was not just a gay disease. It was a scary time; there were a lot of questions, a lot of insecurity.”

Mark elaborated: “There was fear and a don’t-ask-don’t-tell mentality. Hollywood was much more open. I came from Virginia and San Diego. San Diego is a little bit more open, but in Virginia, people were very much closeted. I was at a high school and there was one person in the whole community who was openly gay, and who was 18 years old. ”

For Mark, coming to Hollywood was an eye-opener. “Everyone who was gay was openly gay,” he recalled. “I did feel like, wow, these people have it really good here. They could at least be who they are. I didn’t know there were so many gay people in the world. That was interesting.”

Mark, who was in “The Kids Are All Right”—about a lesbian couple, their kids and the biological father—said that that film was released at a perfect time. “It [was] just the right moment, when people were really ready to hear that story, and gay marriage was literally up for discussion,” said Mark, who has a young son and two daughters with Sunrise.

“Culturally speaking, what enabled us to have that conversation and accept these people, was in large part from what was happening in the storytelling. It wasn’t polemic; it wasn’t about politics. It was simply about people, how they live in the world and how similar we all are to each other. That’s what made the conversation bearable—to have the kind of changes, tectonic shifts in the consciousness of the culture, to have gay marriage happen.”

Mark appreciates a change in his kids’ generation and their attitude toward sexuality. “The way they talk about sexuality is so much more open than my generation. My kids grew up with friends who have gay couples as parents. My son would play at their house and not one time did he ever ask, ‘Why does he have two papas?’

“He’s got friends who are gay, who identify as straight, who identify as bisexual, and he’s 12! This might just be a crazy liberal world that I live in, in New York, but I see it becoming less and less of an issue.”

On playing the brother of Channing Tatum in Bennett Miller’s “Foxcatcher,” which is generating good buzz as a competition entry in the ongoing Cannes Film Festival, Mark said, “That’s like being the brother of Joe Namath. It’s a beautiful movie, really powerful. Steve Carell and Channing Tatum are pretty much the leads of the movie and they are transcendent. Incredible acting—completely changed them. I had an amazing time. It was a tough time. We all had to learn how to wrestle and that was seven months of being beaten up by real Olympic wrestlers who don’t have a lot of patience for Hollywood. I am looking forward to seeing that movie hit the world.

“Bennett Miller is probably one of the most unique directors that we have in America,” he said of his director. “His voice, style, perception of the world is unique. I hope the world receives it as much as I love it. Channing and Steve love it. Channing and I are brothers. We bled then mixed with each other’s blood. Seriously.”

Asked about sporting the wrestling unitard and a balding pate in “Foxcatcher,” Mark guffawed.  “My agent called and said, ‘What the f**k are you doing down there? What do they have you wearing? What’s wrong with your hair?’ I got used to it, but it’s not a naturally comfortable place for me.”

Asked what filming Joss Whedon’s “Avengers: Age of Ultron” has been like so far, Mark, who plays Bruce Banner/The Hulk, obliged, “First of all, it is pretty wild. I don’t think about it but it couldn’t get farther apart (from ‘The Normal Heart’). I am glad to be back. I love those people and I love that Joss is doing it. We all know each other. The first day we were all together was 10 days ago. It was a really nice feeling… to see those [actors] have so many great things happen for them, that’s been good to see. But they are very different.

“Someone was like, ‘How is it going?’ I was like, ‘I think it’s going good.’ I can’t really tell because there’s a second unit and a third unit. They are shooting stuff and we do a scene here. Then three or four actors have to run off to do motion capture. I am in a day of motion capture doing the Hulk, then two hours later I am Banner.

“And I don’t know where everybody is. There are trailers everywhere. I get lost trying to get to my trailer—they are all exactly the same. It’s a behemoth. There are so many moving parts and this is in 30 days.” He dished, with irony, “It’s just very intimate… it’s a totally different world.”