MANILA, Philippines–Nowadays, the reason why most people attend concerts is because they want to experience the music of their favorite artists live. It seldom happens that groups of fans assemble for, let’s say, a reunion during music festivals. But last May 15, this was exactly what took place at the Metrowalk Plaza in Pasig City.

Long-time and new fans alike of the Filipino grunge rock band Teeth gathered at the Metrotent Thursday night of last week for the much-awaited reunion concert of the group that brought seminal songs like “Laklak” and “Prinsesa” to life. 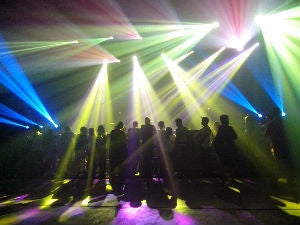 But before we got to the main event of the night, my colleague and I were first greeted by the awe-inspiring view of the lights that will later on help enhance our experience of the concert.

The stage was dark, so was the surrounding, and cocktail tables were available across the VIP area of the venue. These aspects came quite as a surprise to this writer as I was anticipating a less stylish setup, given that we were looking forward to a rock band’s reunion. But that was how the atmosphere went.

The stage remained dark, it grew even darker when the lights were put out, and when they came back we were all caught off guard when we saw the first front act of the night, Kamikazee, already on stage – all set to heat the night up. 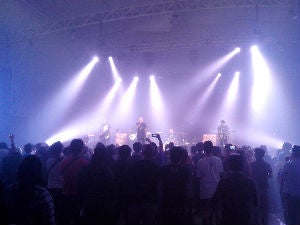 Kamikazee performing as the first front act for the Reunion Concert.

We did not need to see the faces of everyone in the venue anymore, just by hearing the sound of their cheers, one can already tell that they were more than delighted to see Kamikazee on stage.

Soon enough, the band proved why they are worth the cheers and screams. Kamikazee came as a whole package – the band took care of the music while the group’s main man Jay Contreras delivered some of the night’s most “sold out” jokes paired with his sexy dancing antics.

Kamikazee’s set was followed by another “household” name in the rock music scene, Chicosci. 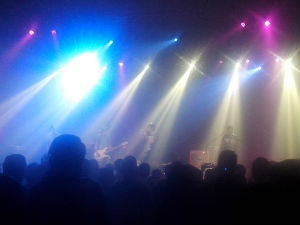 The post-hardcore/pop-punk group approached the stage with a bit of “shyness” – something most fans would probably expect especially from their lead vocalist, Miggy Chavez. But this did not make them fall short of the “smashing” vibe expected of the music show.

When Chicosci finished, the stage was then converted to a DJ station. This, at first, seemed off the beat as everyone was definitely expecting a different type of jam from the front acts. But later on, we all found out that The Diegos, a DJ-ing duo composed of Diego Mapa (Pedicab) and Diego Castillo (Sandwich), will be mixing rock songs instead of R&B.

When the lights went out for a fourth time, the crowd knew exactly what was to come next.

The lights circled in aimless directions, the percussion sounded strong, very authoritative, as if it was telling the entire Metrotent that it’s time for some serious rockin’ business, and the strings, it almost came to a point where the sound waves they made felt seriously heavy on the chest. And when the lights finally settled down, there Teeth was, reunited with their instruments, with the stage and their music, and with their fans.

Props to the production team for an adrenalin rush-triggering intro that’s well-matched for the iconic group. 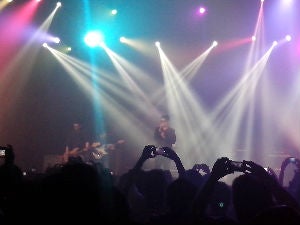 Teeth reunited on stage after over a decade of hiatus.

And when it was finally time to get the rocking party started, the group opened the reunion concert with what could be the most appropriate track “Tugtugan na.” And from this moment on, the band was unstoppable in bringing their promised long set list to the highly-expecting crowd.

The crowd’s response to the band was warm yet lively. As the night grew younger, fans that came with groups who seemed like their high school batch mates back in the days, started banging their head harder, jumping higher, and moving wider.

When the band hit one of the much-anticipated tracks of the night, “Prinsesa,” the number of smartphones and tablets recording performances doubled, and the sound of voices singing along with the band got louder.

But that was not even the highlight of the night.

When the guys of Teeth finally got to “Laklak,” it was then that this writer understood how well-loved the track was by the Filipino crowd. Singing along with it during Karaoke nights was surely fun, but chanting the lyrics along with the live performance of Teeth themselves was epic, historical, and legendary.

It was rather surprising to realize that a grunge rock band such as Teeth can sound sophisticated even though they are performing rock songs. Suave might not be a preferred word, but that was exactly how the band appealed the night they came together for the reunion concert. It was challenging to settle the eyes on one band member alone as each of them was all out in doing their craft. They did seem like they missed being out there, but the performances they brought to the stage spoke louder for all of them.

The band ended the night with “Shooting Star.” This song, you could say, was the perfect cherry on top for the entire show as this gave fans just enough time to cool down from the high, and equally enough moments to savour the awesome show that was the Teeth’s reunion concert.

Before the group left the stage, lead vocalist Glenn Jacinto expressed a heartfelt thanks to the fans. They were not cheesy, not even a bit. But the smirks which appeared to be subtle smiles during their performances were, I think, testament enough as to how much the band enjoyed spending that night with their good old music and their now grownup fans.

Salutations were given that night, along with claps and cheers. But up to this day, thank you’s for the show will probably not run out as the band provided everyone a nice trip down the memory lane.

Indeed, it was more than just a band reunion, Teeth’s reunion concert that was. For the unforgettable experience, they truly deserve a thank you.