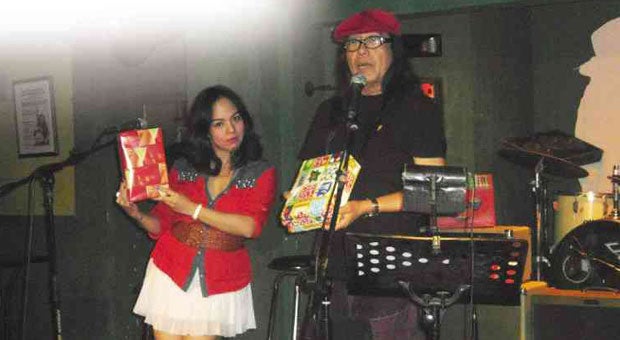 SHE SAYS he threw her whole family out. facebook photo

When singer Freddie Aguilar got embroiled in a controversy last October after announcing that he was marrying a 17-year-old girl, his daughter (and fellow singer) Maegan Aguilar swiftly took up the cudgels for him.

She denounced all her dad’s detractors and came to his defense in my column back  then.

Seems she is over and done with being the “Anak” of Ka Freddie. Since she’s my “soul sister,” my heart goes out to her.

But in the spirit of fairness, of course, I will also get her father’s side on this burning issue.

I wish I had a magic wand to make everything okay between Maegan and her dad. But it looks like the domestic front has turned into a battlefront.

If there’s one thing that I learned from being a parent, it’s that I should not be too much of a mother to be a friend to my kids. And, as a daughter, I learned that since our parents are old, they cannot bend as much so we should be the ones to reach out, even if it hurts sometimes.

Hopefully, the term “Anak” won’t be just the title of Freddie’s timeless hit henceforth, but remain a term of endearment for Maegan, if and when they decide to patch things up and let family prevail.

“My dad threw me out of his house along with my partner Ali and my two daughters (Anaya Jaira and Mahi Vae) on May 12 which was also the sixth-month birth anniversary of Mahi.

“He got mad because the vegetables that he kept in the refrigerator got rotten. I told him I did not touch the veggies because I knew he would get upset.

“He also flared up because I hadn’t paid the P1,500 I borrowed from him. I used the money to buy diapers and milk for Mahi.

“I get only P4,000 as salary in [the bar] Ka Freddie’s Tomas Morato. Then he gets mad that we [are] always cash-strapped. It’s his fault. I am underpaid.

“But when it [concerns] the family of his young wife … he sends them P9,000 weekly even if they don’t need the money.  Me, all I got were hurtful words.

“My family and I are now staying with a bandmate until we find a place of our own. Knowing my dad, he will claim that I ran away. But why would I endanger the lives of my kids, just because of my pride?

“He just threw us out—his daughter and grandkids—to live in the streets.

“I’m cutting my ties with my Tatay from now on. Anyway, he already has a new family. Truth is, Freddie is a selfish man. I’m done covering up for him.

“For him, all that I’ve done amounts to nothing. I ask all music fans to stop supporting Freddie Aguilar and stop going to [his bar] Ka Freddie’s. His earnings will just go to his young wife and her family.

“Hire and support us instead. My brothers Jonan, Jeriko and I need to be free from the claws of our father.

“I have so much more to expose. Now that I’ve decided to cut ties from him, I will tell the whole truth.

“He is a bad man and a negligent father. I had an awful childhood. Not any one of us, his children, did well in show business because he did everything to derail our careers. We lack confidence because he wanted us to fail, so that we would be forever at his mercy.

“I always defended him … even if I got harassed by DOMs (dirty old men) because my father married a minor. I took everything in, out of blind loyalty.

“And he threw us out of the house just because of rotten vegetables. What kind of a father and grandfather is he? Ibang klase siya.

“On May 17, his wife’s younger sister somehow convinced our nannies to abandon us and return to their house. They wanted me to have a hard time and give up. He wanted me to leave my kids in his house so he could claim that I’m an unfit mother.

“I think he knew that I would speak to the media, so he wants to manipulate the situation and make it appear that he’s the perfect father.

“I’m appealing to Gabriela and our Muslim brothers and sisters to stop supporting Freddie Aguilar. I need help in this fight. Someone has to stand up to him and tell him that he’s wrong.

“He’s been wrong ever since he left my mother 17 years ago.

“My past statement of support for my father’s marriage to a young girl was a complete lie. I was never in favor [of that]. I got hurt when he married her without telling me or other family members.

“All he thinks about is himself. He’s the only one who matters in this world. He would often tell us that we were worth nothing because we were not the ones who composed the song ‘Anak.’

“I was mentally and emotionally damaged in his house. I will never return, even if he threatens to have me killed.

“To top it off, he has a one-year-old daughter in Pangasinan. We have a half-sister that he hid from us because it would be yet another issue against him.

“I pity my one-year-old sister and her mom. They were also clueless about my dad’s plan to marry the under-aged girl. They were shocked. They got harassed by their neighbors because of what happened. They called my half-sister’s mom all sorts of bad names.

“The kid won’t even get a birthday celebration this year because his young wife won’t allow it. She is brain-washing my dad. They want to control my dad and his money.

“My dad lets her get away with it, poisoning his mind. Is it hard to see that all she wants is his money? He’s 61 years old.”