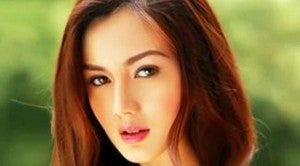 MANILA, Philippines — Arguments presented by both sides on the serious illegal detention case filed by television host Vhong Navarro against businessmen Cedric Lee, commercial model Deniece Cornejo and five others were relegated to the sidelines during a hearing on Friday after Cornejo’s grandmother accused Navarro’s lawyer of laying a hand on her.

When she stepped out of the Taguig Hall of Justice around 7 p.m. on Friday, 63-year-old Florencia Cornejo claimed that Navarro’s lawyer, Alma Mallonga, confronted her during a recess in the marathon hearing, the first to be conducted on the petition for bail filed by the accused. Media men are barred from covering the court proceedings.

Florencia alleged that she was coming out of the bathroom when she met Mallonga who spotted what was written on her shirt: “Justice for Deniece! Jail the rapist!”

She said that Mallonga asked her: “What is this?” as the lawyer allegedly pulled her shirt. She added that she told the lawyer that she was merely exercising her freedom of expression. A woman who was with Mallonga, however, also noticed her shirt and told the lawyer: “Hey, you should report this! This should be reported!” The woman, Florencia later learned, was from the Department of Justice (DOJ).

She said she got scared so she called their lawyer, Axel Gonzales.

“I was trembling and feeling dizzy. I did not say anything rude to her because I was nervous and I didn’t want any problem to crop up in court. But now, I have to be brave. I want to report to the police what happened to me so that they can put it in their blotter,” Florencia told reporters.

She went on to say that the judge in charge of the case, Paz Esperanza Cortes of the Taguig Regional Trial Court Branch 271, learned of her exchange with Mallonga and summoned her. She claimed that the judge told her that there was nothing wrong with the message on her shirt.

“This is my right as a grieving grandmother. Whenever I see my grandchild in jail, I feel like I’m being crushed. I can’t sleep. This doesn’t mean anything; I’m just expressing my sentiments,” she said, referring to her shirt.

When asked to comment, Mallonga denied Florencia’s claim that she laid a hand on her. “Everyone is tired but we are mindful of the limits of what we can do,” she told reporters.

“There are witnesses. If that is her version, let her say it but remember, when you do something under oath and you still force it, there are consequences,” she added, reacting to Florencia’s statement that she would file a report with the police on the incident.

“The court has decided that the matter will be left for another process, if they want to do that. So right now, it will not be at play. I would rather not comment. If [Florencia’s camp is] going to [report it to the police, they can] do whatever they want to do. It’s very easy to make accusations here in our country,” the lawyer said.

During the marathon hearing, which started around 2:30 p.m. on Friday and went on late into the night, Navarro testified in court and was later cross-examined.

“Vhong told his truth. We are going through this process and I am very proud as a lawyer that the process is being followed. Vhong is here to tell his story; the accused will be given the opportunity to present theirs. In the end, it is the court who will make the determination of the guilt of the accused,” Mallonga noted.

The alleged rape happened in Deniece’s condominium unit at Bonifacio Global City on Jan. 22. According to her, Navarro visited her that night and tried to force himself on her. Lee and his friends rescued her, beating up the TV host in the process. The rape complaint she filed against Navarro, however, was later dismissed by a DOJ panel.

Of the accused in the nonbailable serious illegal detention charge, only three are in custody. Lee and Raz are currently detained at the National Bureau of Investigation headquarters in Manila while Deniece is in the custody of the Criminal Investigation and Detection Group at Camp Crame.

Aside from asking the court to allow them to post bail, the three have also filed motions that would allow them to remain where they are detained instead of being taken to the Taguig jail. The petitions, however, remained unresolved as of Friday evening.