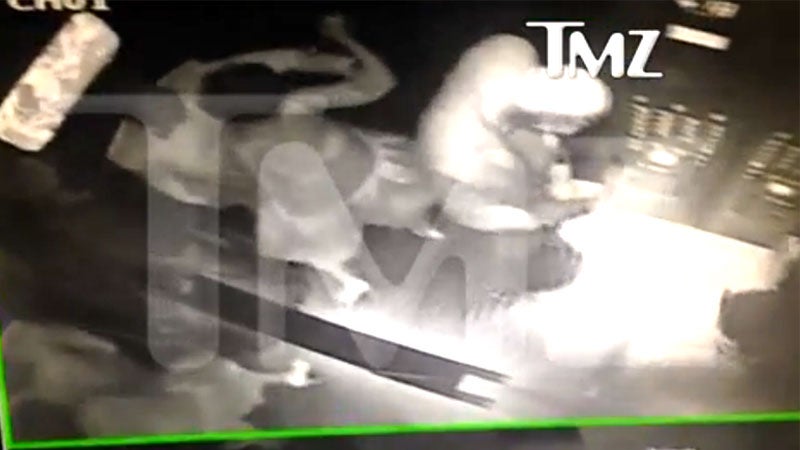 The fuzzy, silent black-and-white video posted on TMZ.com shows Solange kicking and hitting Jay-Z at the Standard hotel, site of an after-party following the glamorous Met Gala in New York on May 5.

A bodyguard is seen trying to restrain the clearly agitated 27-year-old singer, whose 32-year-old megastar sister stood largely in the corner alongside her 44-year-old husband of six years.

The trio can be recognized by the outfits they wore earlier that night at the Metropolitan Museum fashion gala—Solange in a pink Phillip Lim dress, Beyonce in a sheer black Givenchy Haute Couture gown and Jay-Z in a white tuxedo jacket.

In an email to Agence France-Presse, the Standard hotel in lower Manhattan expressed outrage that the three and half minute video had gone viral, and it threatened disciplinary and legal action once it finds who made it public.

“We are shocked and disappointed that there was a clear breach of our security system and the confidentiality that we count on providing our guests,” it said.

“We are investigating with the utmost urgency the circumstances surrounding the situation and, as is our customary practice, will discipline and prosecute the individuals involved to our fullest capacity.” 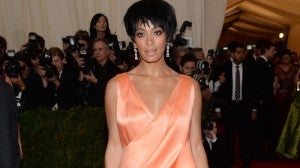 This May 5, 2014 file photo shows Solange Knowles, sister of Beyonce Knowles, at The Metropolitan Museum of Art’s Costume Institute benefit gala celebrating “Charles James: Beyond Fashion” in New York. The Standard Hotel in New York City says it is investigating the leak of a security video that appears to show Beyonce’s sister, Solange, attacking Jay Z. Asked about the video on Monday, May 12, by The Associated Press, the hotel issued a statement saying it is “shocked and disappointed that there was a clear breach of our security system.” AP

Neither Solange, Beyonce or Jay-Z mentioned the incident on their respective Twitter feeds Monday, and representatives did not immediately return calls asking for comment.

Solange, whose new album is due out later this year, performed at the Coachella music festival in California last month, where Beyonce joined her on stage, delighting fans.