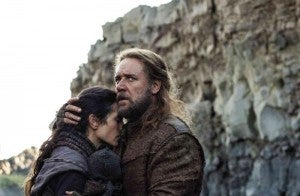 LOS ANGELES–Chinese authorities have refused to allow the release there of biblical epic “Noah,” starring Russell Crowe, which has already been banned in a string of Muslim countries, a source said.

But getting the Bible-based story past China’s cinematic gatekeepers was difficult, given Beijing’s sensitivities on religious issues, it said.

A source familiar with the issue, who declined to be identified, told AFP simply that the film “will not release in China,” declining any further comment.

The film, which swept to the top of North America’s box office when it was released in March, has been banned in Bahrain, Indonesia, Malaysia, Qatar and the United Arab Emirates, among other countries.

The newspaper cited one source who suggested “Noah” may have been refused a Chinese release for commercial reasons, because several other Hollywood blockbusters are due out there in the coming weeks.

“Godzilla” is due in Chinese cinemas on June 13. “The Amazing Spider-Man 2” took $10 million in its first day in theaters over the weekend, while “Captain America: The Winter Soldier” has made more than $115 million in China.

It has grossed $99 million in six weeks since its release in the United States, according to box office tracker Exhibitor Relations. It has made another $233 million overseas, the LA Times reported.

The film also angered some Christian institutions in the United States over Crowe’s reportedly unconventional portrayal of Noah, who is regarded as an important figure in both Christianity and Islam.