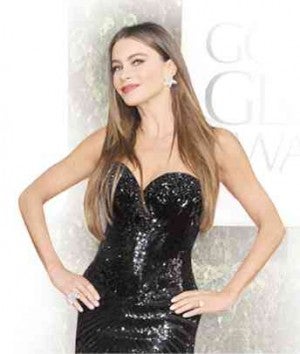 Sofia Vergara is already in her 40s, so her “sudden” ascent to stardom via the hit sitcom, “Modern Family,” has caught show biz’ movers and shakers with their collective pants down. If she had stardom in her cards, why did they come up with the winning combination only now?

“Blame” it on the perfect confluence between her performing gifts and the character she plays on “Modern Family,” an update on the old “kooky Latin bombshell” stereotype that previously also did the trick for the buxom, sexy and over-the-top, hot-to-trot likes of Maria Montez, Katy Jurado, Carmen Miranda and Pia Zadora.

The “sexy Latina” template has remained popular in Hollywood for many decades because it provides greater variety to onscreen sexiness and “fun and games.”

One of our early favorites in this regard was Carmen Miranda, the florid dancer-singer with luscious lips, long (fake) eyelashes—and her signature “fruit basket” headpiece.

She added zing! and zaftig excitement and color to many Hollywood musicals before her career finally faded into oblivion, and her colorful presence is remembered to this day.

The sensual Latina’s most recent reincarnation is Snooki of the hit reality show, “Jersey Shore,” who incidentally has beaten the odds and not faded away after her hit series ended its run.

Instead, a platoon of stylists have helped her reinvent herself, from “crass” to “class”—well, more or less—and she continues to guest on TV shows to this day.

As for Sofia, she too has benefited from the “sexy Latina” template’s abiding popularity, but she’s given it her own spin, and has thus come off as a bigger winner than if she had just settled for going through the cliché “sexy” motions.

After all, she’s older than some, although it really doesn’t show, so she’s more “knowing” in the way that she’s tweaked the comedy type to her unique advantage. Yes, she gets a lot of comedic mileage out of her American malapropisms, but she has much more to offer than those bemusing booboos.

In fact, over the course of her character’s “arc” on “Modern Family,” she’s become nothing less than the personification of the show’s appeal to non-W.A.S.P. viewers, and the problems they encounter cutting up their rightful slice of the American pie.

The persuasive power of this special appeal cannot be gainsaid, since Latino-Americans’ influence and purchasing power in the States has increased by leaps and bounds (and, a cha-cha shimmy thrown in for good measure).

In fact, Sofia has become so popular that she’s cited along with Jennifer Lopez and Ricky Martin as key stellar “persuaders” in the continuing campaign to make Latino stars more popular and influential, not just in mainstream “Stateside” entertainment, but also globally.