Even local detractors of his methods, charmed by his confidence, watched the Manila show this week
By: Nice Rodriguez
Philippine Daily Inquirer / 01:33 AM May 02, 2014 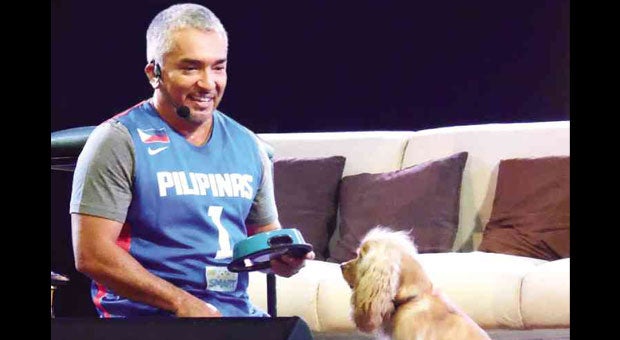 American television’s “Dog Whisperer,” Cesar Millan, wowed a crowd of dog lovers and his fans in a packed show Tuesday night at the Eastwood Central Plaza. At the start of his presentation, he made it clear that, as a pack leader, he was going to help the audience members understand their dogs’ needs. “I train humans and not the dogs!” He appeared on stage wearing a blue Pilipinas jersey, which thrilled the spectators.

The venue was outdoors and it was hot and humid. Millan said he loved the weather because it reminded him of Mexico, his birth country.

Much of his rapport with the fans was achieved by drawing comparisons between the Philippines and Mexico. Thus, he likewise lightened up the mood by spoofing several “pathetic” habits of dog owners. For instance, he said, in a modern country like the United States, dogs have started to behave differently because of the fast-paced environment that inevitably made their living conditions unnatural.

Millan migrated to the United States illegally in 1990 at age 21. He achieved worldwide fame through his popular National Geographic  TV series, “Dog Whisperer,” which debuted in 2004.

All that he knew about handling dogs, he learned from his grandfather, Millan said, and he was grateful for that. On the other hand, he acknowledged that it is the reason that serious dog trainers—those who use modern training techniques called positive reinforcement—find his methods primitive, severe and, ultimately, unacceptable.

Surprisingly, these local detractors turned up full-force during the Eastwood show to watch him work. They were charmed by his confidence.

Millan stressed that dogs do not understand social classes, power, money or fame; they are entirely guided by instincts. Dogs are pack animals, he said—as he often does on his television shows (after “Dog Whisperer,” he had “Leader of the Pack” and soon, “Cesar to the Rescue”). Growing up in a small Mexican town, he intuited early on that every person in the household also became a pack member.

“In Mexico, the dogs are skinny but they do not have behavior problems,” he quipped. “In the United States, they’re chunky but I get to have a TV show.”

Many behavior problems can be solved by returning to simplicity, the smiling shaman said, and by “unplugging from the modern world and reconnecting with Mother Nature.”

When things go awry, he pointed out, an owner cannot blame the dog any more than a mountain climber can blame the mountain. 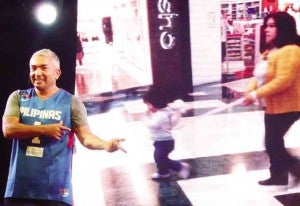 SMILING shaman notes, “Humans are being turned into dogs,” and shows this shot of a toddler on a leash. photo: Nice Rodriguez

He showed a short video clip of dogs, unleashed, following human leaders, aboriginal people who hardly had any clothes on. Millan recounted, “Where I came from, dogs were never collared and leashed. But they followed their leaders.”

But dogs should be approached calmly, he said, because they are attuned only to their handlers’ energies.

A dog named Pancake was presented as a case study. Labeled a “biter,” it exhibited “food aggression” (other trainers’ term for this is “resource guarding”) when its raw hide treat was taken away.

The dog even snapped at its owner, but when Cesar intervened, letting out his famous and assertive “Psssst!” Pancake calmed down and sat still. The audience was impressed.

The root of many canine problems, Millan insisted,  are people in the modern world trying to turn pets into humans when, in fact, dogs “want to keep their identity as dogs.”

On the other hand, humans are being turned into dogs, Millan noted. He showed a shot of a toddler on a leash being walked by a woman, presumably the mother—a familiar sight in malls and airports.

So how to approach an aggressive dog? “It’s not what you say but how you say it. Dogs should be disciplined in a calm and confident manner. It is important to set rules and boundaries while they’re still as young as puppies.”

His dog-training trinity: Exercise for the body, discipline for the mind and affection for the heart.

It would be beneficial, he said, flashing his famous smile, for an owner to give the dog a job. “Notice how dogs of handicapped people are well-balanced while normal people have handicapped dogs.”

While working on one’s energy, it is also important to work with the dog’s energy. It is not true that dogs are unpredictable, he claimed. “Our dogs are always talking.” He showed another video clip of the only dog that sent him to the hospital, a video that went viral and made him look like a fool among trainers.

In the video, he is heard to say, he didn’t see the aggression coming. How to free one’s arm from a dog’s jaw? Gag him by pushing the arm towards the dog’s throat to force it to release.

Be clear about who the leader is, Millan said. Never let the canine win in “eye wrestling” or a “staring contest.” Still another video of the reformed retriever playing with Millan was later shown, making a case for not “putting to sleep” dogs with aggression issues.

Hero dog Kabang, with her vet Dr. Anton Lim, made a guest appearance. Audience members thought she was another case study because she kept lunging at her vet. But Millan didn’t even go near Kabang, the dog that famously saved two children from being run over by a motorcycle. She was treated for injuries abroad and, according to Dr. Lim, has since received donations from 46 countries.

There was little in Millan’s live show that he hadn’t already written in his many books or said on television. Still, it was mesmerizing to watch him at work on misbehaving dogs with a little poking and “Pssst!”

And hearing a famous guy own up to his mistake via a humiliating video clip won him more fans, for sure. Someone as natural as Cesar Millan is too difficult to ignore.

(The author is the president of the Philippine Animal Welfare Society’s Aspin— or Asong Pinoy— Club.)