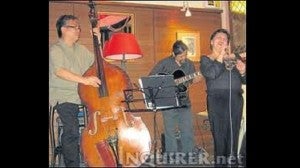 Veteran jazz guitarist Edgar “Koyang” Avenir was, according to his long-time band mate, bassist Colby de la Calzada, “an excellent musician, a rare type of artist who could play with anybody.”

Avenir died early on Saturday of pneumonia arising from lung cancer. He was 61.

“Aside from his skills, he was a very generous musician,” recalls special friend, singer Zenaida Celdran, who took care of Avenir in the last few months of his life. He was always willing to help fellow artists who wanted to learn more about music, she said.

Born on May 25, 1950, Avenir grew up in the University of the Philippines campus in Diliman, Quezon City. “He was an Area One kid,” said De la Calzada, referring to the residential area for UP faculty. “I think his dad was a UP professor.”

His neighbors included Ed “Sarge” Cariño and John Lesaca, both of whom would later play with Avenir in various bands.

As a young guitarist, Avenir played with the renowned jazz pianist and composer Bong Peñera, as well as the Sangkatutak Band, whose members included Cariño, Ivy Violan and Richard Merk.

Avenir and De la Calzada performed together as session musicians for the Apo Hiking Society in the 1990s. “We also played at the North Sea Jazz Festival (in the Netherlands) in 1994,” recalled De la Calzada.

Asked what made Avenir an outstanding musician, De la Calzada said: “He knew how music theory works. He was a smart guy who liked to get to the bottom of things… He could play all kinds of music, from jazz to OPM to kundiman to the classics. And he could write good arrangements, like what he did for Mishka Adams in her albums.”

According to Celdran, Avenir was influenced by both foreign and local musicians. “But although he liked Pat Metheny a lot, he told me that he idolized a simple Cebuano guy, a mechanic at the UP campus who made his own guitars,” she said.

Before he was taken ill, Avenir regularly performed with Celdran and De la Calzada at La Cuisine Francaise in Makati. “He was still playing with us until August,” said De la Calzada.

The wake starts at 3 p.m. Sunday at the Loyola Memorial Chapels, Commonwealth Avenue, Quezon City. The date of interment will be announced later.