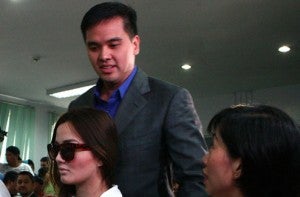 MANILA, Philippines – The Southern Police District (SPD) has received the warrants of arrest against businessman Cedric Lee, model Deniece Cornejo and several others over the serious illegal detention case filed against them by television host-actor Vhong Navarro, a radio report said.

SPD Director Chief Superintendent Jose Erwin Villacorte was quoted in the report as saying they received the warrants on Monday noon.

Police could not say for sure why the warrants do not yet include Cedric Lee’s sister Bernice and Jose Paolo Gregorio Calma.

The warrants of arrest were issued by the Taguig City Regional Trial Court Branch 271 against Lee, Cornejo and their co-accused Jed Fernandez, Simeon Raz and Ferdinand Guerrero, after they had been issued arrest warrants for a separate grave coercion case on April 16.

Cornejo and Fernandez have posted a P12,000 bail last Wednesday for the grave coercion case. Those who have yet to do so are Lee, his sister Bernice, Raz, Calma and Guerrero.

Serious illegal detention, however, is a non-bailable offense.