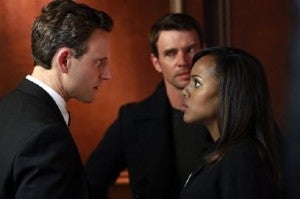 This image released by ABC shows Tony Goldwyn, from left, Scott Foley and Kerry Washington in a scene from “Scandal.” The popular series ended its third season Thursday, April 18, 2014. AP

NEW YORK — “Scandal” is arguably the nuttiest show on the air. But there’s a method to its madness, demonstrated every week with OMG intensity.

Thursday’s third-season finale was a reminder of its tasty kookiness. Not as jaw-dropping as some (or many) episodes, it still was a display of how this show routinely shakes things up almost, though somehow not quite, beyond belief or recognition.

Read no further if you’re immune to FOMO and haven’t yet watched the episode.

ABC’s “Scandal,” of course, centers on Olivia Pope (played by Kerry Washington), a Washington fixer at the highest level. She has had an on-again, off-again affair with the dashing President Grant (Tony Goldwyn), whose wife, the first lady (Bellamy Young), puts up with it with varying degrees of tolerance and bitterness while, recently, having her own fling with her husband’s choice for his new vice president.

It’s that kind of White House. And that’s just for starters.

But how did the season end?

Olivia, realizing every terrible thing that happens is due to her (no wonder: She’s the lead character!), concluded, “I’m the scandal! And the best way to deal with a scandal is to shut it down.”

So she ditched her firm, her city and her president-squeeze in a private jet with her backup beau (played by Scott Foley), a sexy, shadowy figure who, for his own reasons, also chose to part ways with the capital city.

It doesn’t take a crystal ball to predict they’ll be back as quickly as the jet can be refueled.

No less predictably, Fitzgerald Grant was elected to a second term, inching by his opponent thanks to sympathy votes when his teenage son collapsed and died during an eleventh-hour political rally.

But — surprise! — it was Rowan Pope, Olivia’s megalomaniac dad (Joe Morton), who murdered the president’s son. Pope was scheming to guarantee Fitz’s re-election and then seal his trust after wreaking vengeance on the widely assumed killer, Pope’s own ex-wife and Olivia’s mom.

Introduced as an evil guy then revealed to be a good guy during the past year, now Rowan Pope has been restored to monster status — as he claims his place at the side of the unwitting chief executive.

Meanwhile, the loss of their son has helped bring Fitz and his wife back together (yet again), just days after he was ready to lose the election and retire to a small town in Vermont with Olivia. (He would be mayor. She would make jam.)

It’s just another narrative ricochet. But “Scandal” packs more twists and turn-arounds than a testing ground for boomerangs.

People complain that nothing gets done in Washington. “Scandal” dramatizes an opposite kind of city, where the action never stops. Except (painfully for “Scandal” fans) the next few months, while the show is on break.