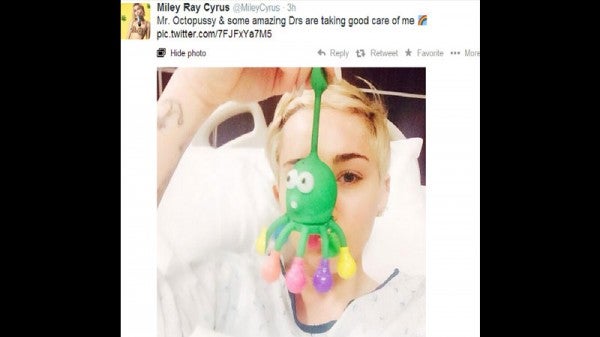 LOS ANGELES—Pop star Miley Cyrus has been hospitalized and has had to cancel a concert in the US state of Missouri, the venue said Tuesday.

“Cyrus has been hospitalized for a severe allergic reaction to antibiotics and has been placed on medical rest by her doctors,” said a statement from the Sprint Center in Kansas City.

“She will not be able to perform as scheduled.”

The former Disney child star turned bad girl was due to take the stage there Tuesday night.

Her publicist Meghan Prophet confirmed her absence and hospitalization.

Cyrus herself took to Twitter to reach out to her fans, saying she was as heartbroken as they were.

She also tweeted a picture of herself in bed wearing what looked like a hospital gown.