Who could have cooked up that one? Are PC’s former colleagues still at it? They’ve been badmouthing PC for ages.

Are NC’s minions still in touch with some of these attack dogs?

A mole says Handsome Hunk was all set to attend a go-see but backed out at the last minute. Why?

Naughty spy surmises that HH didn’t want to bump into Showbiz Insider, with whom he had a messy misunderstanding that ended in a bad falling-out. So much so that HH can’t stand to be in the same room as SI.

Turned out, SI wasn’t at the venue.

Another source claims HH didn’t actually walk out, he just needed to be somewhere else.

There is an incessant smear campaign against Major Star.

An ancient scandal was even resurrected, dredged up from the dustbin of show biz history.

Online hacks have been fanning the flames. One of them is curiously close to the camp of Beleaguered Celeb, who earlier figured in a similar controversy.

Why bring it up? Maybe to cover up BC’s current woes?

Or does misery really love company and BC’s handlers are making MS appear just as wretched?

From the Inquirer Radio program “Inquirer Entertainment” (dzIQ 990 AM, Monday to Friday, 3 to 5 p.m.):

Glamorous Star has found a New Sweetheart. Everyone is happy for GS, who has gone through personal tribulation.

But some well-meaning friends are not so optimistic.

They’re cautioning GS against NS, who is said to have a checkered track record.

Yet another celebrity marriage bites the dust.

Political Scion tied the knot with Wealthy Heir in a grand society event.

When they called it quits, it was a hush-hush affair. WH has been active in the dating circuit again.

A heart-rending scene occurred when WH bumped into High-profile Father-in-law. HF wept shamelessly over the demise of the once-promising union. 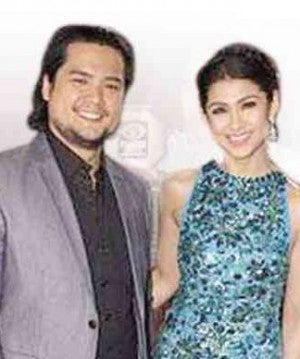 Carla Abellana confirms breakup with Geoff Eigenmann: “Though ’yung mga pinagdadaanan namin very personal, I owe the fans the truth. We can’t keep on denying … We are no longer together.” (Classy. So we hope this doesn’t get dragged into some movie promo, like all other biz breakups in recent memory.)

Carla, asked what the most difficult part of the split-up was: “You don’t break up  with [only] Geoff; you break up with the family … They never treated me as an outsider. Pakiramdam ko I was part of the Eigenmann family … Sobrang grateful ako sa kanila.” (Ah, yes, those wonderful Eigenmanns!)

Carla’s message for Geoff: “Thank you for making me a tougher person, for taking care of me and loving me … I hope and pray na maging OK ang lahat sa ’tin.” (Maybe not today.) 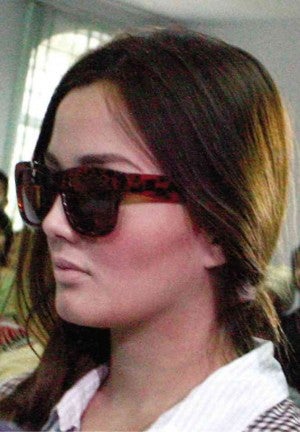 DENIECE Cornejo won’t back down. photo by Kimberly dela Cruz

Enzo Pineda confirms breakup with Louise de los Reyes: “Desisyon niya … I have no regrets, nagmahal lang naman ako ng totoo. I just want to move on.” (Do it fast.)

Jennylyn Mercado on being single: “Mas OK ’to… at peace…” (Enjoy.)

Kris weighs in: “As husband and wife, we may have failed, but we have the rest of Bimby’s life to be good parents to him.” (For Bimby’s sake, we’re holding this over your head.)

Kris on James: “He loved me enough to marry me. That love didn’t survive but I’ll always be grateful … Pinahirapan ko rin talaga ang buhay ni James in the same way na sinaktan niya ang puso ko. But that’s all in the past… we can really be friends.” (This one, too, for our sake!)

Sam Concepcion on reports that he was confronted by Anne Curtis in a bar: “We did talk … It was a surprise … The important part is, we’re OK.” (Would she remember?)

Sam on rumors that he was cheating on Jasmine Curtis-Smith with Julia Barretto: “No truth to that. Sana ’di na lumaki ’yung issue.” (We didn’t start this.)