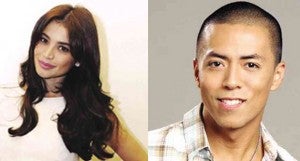 CURTIS (LEFT) AND RAYMUNDO. Refuse to be counted down and out after their traumatic experiences.

Really terrible things happen, not just to you and me, but sometimes to otherwise seemingly invincible stars and starlets. These past weeks, what these exceptions to the impervious rule have had to endure has been unusually awful and freaky:

While shooting underwater and beach scenes for “Dyesebel,” Anne Curtis was attacked by a deadly box jellyfish, leaving her with big welts and landing her in the hospital—definitely nothing to crack silly, insensitive jokes about!

What happened to Lance Raymundo was even more freaky: While he was lifting weights at the gym, his exercise buddy failed to correctly handle the heavy barbell—which slipped and hit Lance squarely in the face, crushing some bones and almost killing or permanently disfiguring him.

While we feel deeply for these temporarily sidelined stars, we have been heartened by the fact that they have both refused to be counted down and out after their traumatic experiences.

Quite to the contrary, they have shown the way for other people to deal with their own adversities in a similarly brave and “unsinkable” way, learning lessons that should be learned, but never, ever throwing in the towel, getting consumed by self-pity—and playing the blame game!

In fact, Lance has opted not to file charges against anybody, philosophically noting that accidents will happen and nobody intentionally set out to do him ill. As for Anne, she’s focusing on recovering fast enough to resume taping for her ongoing series soonest, so that its regular screening of new sequences won’t be compromised.

We trust that viewers will learn from these “unsinkable” stars to deal with the bad hands, both accidental and intentional, that fate will throw their way, with similar resiliency and fortitude!

Most new teleseryes follow the opening lyrics of “Do-Re-Mi” in “The Sound of Music”: “Let’s start at the very beginning/ a very good place to start.” They begin with a “back story” going way back into the lead characters’ childhood or, even earlier than that, to their grandparents’!

Why so early? The idea is to establish the initial parameters of the new series’ central problem or conflict, the reason why families and clans fight to the finish, even generations after the fact.

The conflict is presented in such deep and undeniable terms that the need to avenge old hurts and crimes absolutely cannot be denied! Unfortunately, this back-story approach makes the first two weeks of a new series progress so slowly that impatient viewers’ attention wanders.

That’s why we were relieved that, “Moon of Desire,” the afternoon teleserye that started telecasting two weeks ago, chose to do its storytelling in the present tense—a most welcome change.

It presented its adult female lead character, played by Meg Imperial, as a woman who hates men because they have hurt her so terribly in the past.

And, how did she arrive at this dark view of life, men and romantic relationships? Only later are we informed that she was suffering from a severe case of hypertrichosis, which left her with “werewolf” hair growing all over her body!

At the start of the series’ debut telecast, the focus was on this long, sad history’s dire effects on her adult psyche, and we welcomed the more dynamic storytelling thrust.

All too soon, the series would have to clarifyingly launch into its long back story, but the “present tense” opening gave us an opportunity not to wallow in the past, and to instead appreciate Imperial’s confident lead portrayal of the quintessential man-hater.

As in  her recent film with Jericho Rosales, Meg’s performance in her new TV starrer was quietly insightful and informed, giving us the reassuring feeling that we were in good thespic hands. Yes, the role is “sexy,” but only subtly so, because the show’s afternoon telecast slot limits what it can do and show in that regard.

Trouble is, even as Meg’s “establishing” scenes had a positive impact on viewers, its back-story sequences, which eventually did take over, were fraught with “if and buts.”

A problem relationship involved the hairy child’s grandmother (Carmi Martin), who kept her prisoner so that others would not learn of her grandchild’s “shameful” secret.

This was depicted in too nominal a manner, because the little girl could still slip out of her “prison”  anytime the script needed her to “embarrass” her lola!

Another weak plotting element was the girl’s only friend (Bugoy Cariño) and his eventually divulged reason for being nice to her: to make money from the juvenile relationship for his poor family’s needs. The fact that he was still a child made the “user” motivation too specious to be believed.

We trust, however, that with good actors like Meg onboard, “Moon of Desire’s” adult scenes will be much better staged and realized.