Slap, shock, off they go to conquer the world | Inquirer Entertainment

Slap, shock, off they go to conquer the world 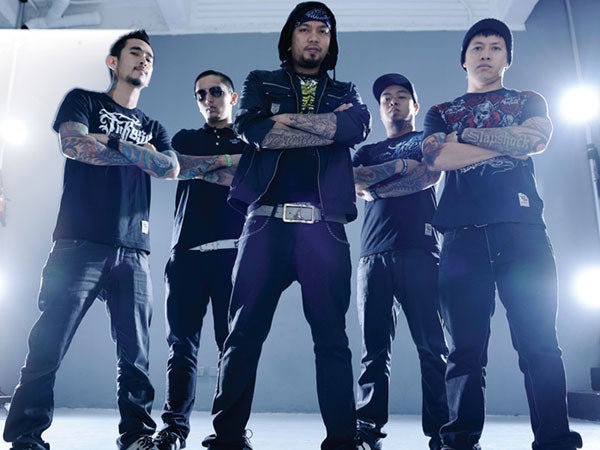 Rap-metal band Slapshock has been producing its own albums for the past 10 years or so, said frontman Jamir Garcia. As such, he added, the group controlled practically every aspect of the creative process—from songwriting down to the mixing.

And as in any other collaborative project, a little compromise was involved. Jamir and the gang had to reacquaint themselves with that when they flew to Los Angeles in October last year to work on “Night Owls.”

For the vocalist, the challenge was to be receptive to new ideas without sacrificing integrity. But with a team that included System of a Down bassist Shavo Odadjian, and such prominent sound engineers and record producers as Damien Lewis, John Greenham and Terry Date, Jamir found giving his full trust a lot easier than expected.

“They were on our wish list of people that we wanted to work with. We cooperated and compromised more than usual, because we believed in their work and insights as artists,” Jamir told the Inquirer in a recent interview. “We didn’t expect BMBX to get them all together for us.”

The result of that monthlong work, Jamir enthused, is the “best-sounding Slapshock album yet.” The EP has five tracks—the eponymous “Night Owls,” “Dangerous,” “The Crown,” “Turn Back Time” and “Coma.” 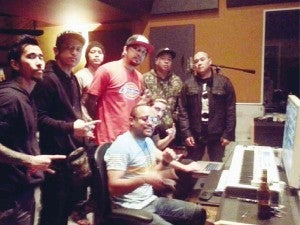 THE BAND with producer apl.de.ap (center) at the studio in Los Angeles last year. photo by kevin

“It’s also one of our most meaningful [outputs] because we’re celebrating our 17th year on the scene,” he said. Known for songs like “Salamin,” “Agent Orange” and “Wake Me Up,” the live-wire act had previously released seven albums, the latest being “Kinse Kalibre.”

Lee added that “Night Owls,” intended for international release, could be a turning point in Slapshock’s career. “It’s been our dream to have  a career outside the Philippines,” he said. “We hope to expand our audience.”

After the release of “Night Owls” later this month, the five-man band will embark on a tour to promote the EP: May 9 and 11 at Al Nasr Leisureland in Dubai; May 22 at the Music Matters Live fest in Singapore; and May 23 and 24 at the MTV Exit Live fest in Udon Thani, Thailand.

Slapshock will likewise hold a concert series in North America:  May 30 in San Diego; May 31 in Las Vegas; June 6 in San Francisco; and June 7 in Los Angeles. “We’ll make the most out of each stop to promote the album,” Jamir said, “and we hope the shows ignite good reaction.”

Excerpts from Inquirer’s interview with Jamir and Lee:

What made you say that “Night Owls” is your best-sounding record yet?

Jamir: It’s our most meticulously-produced album. The songs are all in English and have an international [flavor], but still express Filipino sentiments and relate our way of life. For instance, the song “Night Owls” tells of misfits in society. It also proves that Pinoy rock is not dead but soaring high. We reign at night. “The Crown” is about corruption and greed. It was inspired by the pork barrel scam.

What is the new EP’s difference from your past works?

Jamir: I experimented here with different structures and tunings; I played around with my singing. I challenged myself to sound more melodic. Lee switched to a five-string bass guitar, and we used strings with a higher gauge.

Lee: Here we showed that one doesn’t have to scream all the time to achieve heaviness. It all depends on the approach. Plus, the songs are already aggressive, to begin with.

Did you change your approach to songwriting, knowing that “Night Owls” would be released internationally?

Lee: Since we’re releasing the EP outside the Philippines, we decided not to include our heaviest tracks. In a way, this EP serves as [overseas listeners’] introduction to our music; we wanted it to have just the right level of aggression. We didn’t want to overwhelm first-time listeners.

The new music is by no means mellow; the songs still have an underground feel to them and won’t alienate longtime fans. We hope to win more listeners and widen our market, and we’re excited about that. I believe our music is accessible enough to everyone who loves rock.

What do you think will be achieved by releasing an album abroad?

Lee: We’ve played in just about every place imaginable in the Philippines. I think the challenge is, kailangan naming magpa-impress ulit, show something new in order to win new fans.

Jamir: He didn’t give much input; he just listened and told us whether or not he liked what he heard. He showed tremendous trust in us. More than anything, we feel that apl is a true friend. We didn’t feel like we were working. (The two artists met when Slapshock opened for The Black Eyed Peas’ first Manila concert in 2006).

We often hung around at his house, which was around five minutes away from our apartment on Sunset Boulevard. We would drop by and just watch TV. He bought us booze when our supply ran out. And a few times he even cooked for us!

Apl said in a previous interview that he let you use his personal studio?

Jamir: Yes, and it’s really state of the art. But mostly we worked in a studio picked by our sound engineer, Damien, with mostly analog equipment that suits rock music.

Jamir: We had a tough, but rewarding, time with Shavo because he was extremely strict. He’s very passionate, has lots of ideas, and is very hands-on. He had a lot of input in the guitar-playing, arrangement, mixing, harmonies and vocals. He’d tell us straight up if he didn’t like certain parts of our songs. Sessions with him in his Burbank studio sometimes lasted 15 hours.

What have you learned from working with someone as accomplished as Shavo?

Lee: That it’s important to know how and when to compromise. Once, I practiced a long section of a song so that things would be seamless in the studio. But Shavo asked to scrap that part out. When he suggested something different, though, he made sure to explain why. In the Philippines, producers will bring out the best in you, but they won’t touch your work. It’s different in the US. Working with foreign producers, you learn to let go of your work from time to time.

Did you reason out with him when you didn’t agree with some of his ideas?

Lee: Yes, sometimes we told him that a certain part of a song couldn’t be taken out. We explained our vision to him and he listened. But before we [did that] we also listened. It’s give and take.

What’s the biggest compliment you received from Shavo?

Jamir: Shavo told us, “I’ll go to the studio. If I don’t like your songs, I won’t work on it; if I like it, then I’ll stay.” After listening to our material he was like, “I like this… this one, too.” His favorite is “The Crown.”

Also, the mere fact that Terry Date listened to our songs was a huge honor. He has worked with some of the best rock acts out there—Deftones, Pantera, Limp Bizkit, you name it.

What about the best advice?

Jamir: It was more encouragement, actually. We learned that you should not be afraid to try different things to make a song the best that it can be; that you have to take your time. Dapat bine-baby ang kanta.

Do you see yourselves moving to the US to better pursue an international career?

Lee: We’ll still be based here, but we’ll definitely be traveling more. We can’t leave our fans—

they’ll go hungry for our music.

Jamir: Our hearts are still here. We also have commitments with our sponsors, Dickies and Red Horse. But given the opportunity to represent our country on the world stage, then of course we’ll grab it… we’ll do it.