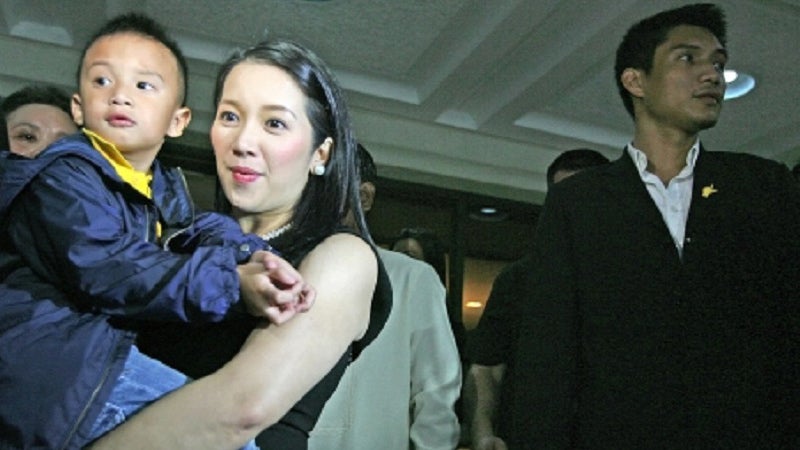 MANILA, Philippines—President Benigno Aquino III’s youngest sister Kris gave a valuable advice about parenting on Tuesday night: Never ever fight with your partner in front of your child/children.

“How I wish I never picked a fight or argue with James infront of Bimby,” she said in Filipino in a talk show she’s co-hosting with Boy Abunda.  She’s referring to former husband, basketball star James Yap, and their only son, James “Bimby” Yap Jr.

She said because of those arguments, they had a lot of “fixing up” to do with Bimby with regards his relationship with his father.

In the same episode, shown was a clipped TV interview with Yap.  In tears Kris said thank you to Yap for being a good father not only to Bimby but to Joshua, her love child with actor Phillip Salvador.

“You step up for Joshua, hindi mo trinatong iba sa ‘yo (you didn’t treat him as if he’s not yours),” she told Yap.
She said she realized many things. One was Yap meeting the nine-year-old Joshua and taking care of him when they were together until now that they got separated and Joshua are almost of the same height with Yap.

“I appreciate that a lot because you (Yap) open your heart to him (Joshua). I was consumed with so much anger I forgot the things to thank for,” she said in Filipino.

“I’m sorry for all the heartaches,” she added.

In return, Yap also thanked her for giving the opportunity to be a father to Bimby and Joshua even up to now that they’re legally separated.

“Sorry din, hindi man ako perfect na partner, napatawad mo pa rin ako (Even though I am not a perfect partner you still forgave me). Thank you,” Yap told her.

The full one-on-one interview with Yap will be aired in a future segment, Kris told Abunda.

Before ending the show, Kris looked at the camera and thanked Yap again with an afterthought.

“Thank you. I am at that point in my life wherein I want to be with somebody else,” she said, with cheers heard from the TV studio crew in the background.

Abunda tried to ask who is that somebody else.

In the past few weeks, Kris was rumored to be dating model Daniel Matsunaga, followed by actor Derek Ramsay due to her Twitter posts.

On Monday, she admitted on television she and Quezon City Mayor Herbert Bautista, who is also an actor, are “a work in progress.”

Kris Aquino at peace after reaching agreement with James Yap

Read Next
Kris Aquino confirms relationship with Herbert Bautista
EDITORS' PICK
Leaked: A 60x Zoom and all-new Helio G96 mean a complete overhaul for TECNO Mobile’s new CAMON 18 series
Next level mobile photography within reach with vivo X70 co-engineered with ZEISS
Duterte blasts rights groups for overlooking the ‘other side’ of drug war
Lacson wants DOF to suspend TRAIN law as oil prices rise
Delivering delight against all odds
153 protests filed vs China actions in PH waters in 2021 — DFA
MOST READ
Robredo to supporters: Be calm, gentle and do good deeds
Duterte inaugurates P684-M bypass road project in Quezon
Matibag calls Senate budget hearing ‘political,’ gets kicked out
Duterte: No drug dealers among the rich in PH
Don't miss out on the latest news and information.