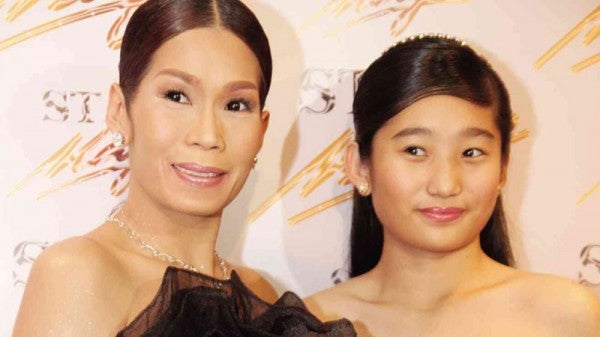 POKWANG (left) wants her daughter Ria Mae to feel complete as a person.

Comedienne Pokwang said she would not get in the way of daughter Ria Mae, should the girl decide to look for her estranged Japanese father, especially since she is marking her 18th birthday this year.

“I asked if she wanted to meet her father and she simply replied, ‘Why not?’ I guess she’s still a little undecided. I’ve always told her not to harbor ill feelings toward her father. I remind her that she wouldn’t be here if not for him, and that she should have a heart that’s open and forgiving,” said Pokwang during the press launch for the ABS-CBN drama series “Mira Bella.”

The 43-year-old single mom said: “I still appreciate his role in my life because I wouldn’t have Ria Mae if not for him. She’s my inspiration. I will not be selfish…I’d do anything to make Ria Mae feel complete as a person, even if that meant reconnecting with her father.”

Pokwang, however, stressed that she no longer hoped to reconcile with her former partner, who is based in Japan with a new wife and their own children. “Their kids are almost the same age as my daughter. We no longer communicate, but I heard that he has found out about my current work here in the Philippines from a common friend, and through TFC (ABS-CBN’s international channel).”

Pokwang admitted that failed relationships have left her scarred and reluctant to try again. “May takot factor,” she confessed. “I’m not saying that men shouldn’t be trusted. I’ve just decided not to be too concerned about my love life and, instead, to focus on saving up for my daughter’s future.”

Ria Mae is a college freshman taking up Culinary Arts. “She’s got three more years in school—and maybe then I can finally relax.” Pokwang also had a son; he died of a congenital brain ailment at age 6.

Despite all her heartaches, Pokwang admitted being “a romantic” and that she still believes “there’s a guy for every girl.”

She advised single moms like herself to enjoy life to the fullest. “Make your children the source of your happiness,” she said. “Don’t be afraid to fall in love again, but be sure to set priorities.”

“We didn’t mind that it took so long to get the show started. We knew it would be worth it,” Pokwang said. “Julia is a promising actress. She admits that she’s not as good as her aunts (Claudine and Gretchen), but tries to make up for it by working hard.”

The comedienne, bullied in the past because of her looks, said she accepted the project because it hit close to home. “The story speaks to me. I wish people would define beauty not by what they see but by what’s inside someone’s heart,” she said.

Pokwang starts working in June on a comedy film, “My Amensia Z,” opposite Zanjoe Marudo.