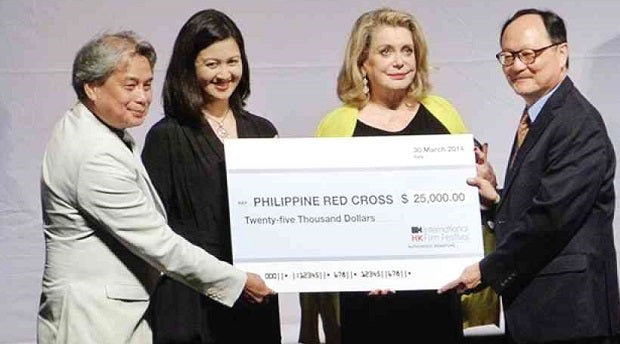 Organizers of the 38th Hong Kong International Film Festival (HKIFF) marked its first “Philippines Day” on March 30 by donating HK$25,000 (P145,132.25) to the Philippine Red Cross for the rebuilding of areas ravaged by Supertyphoon “Yolanda.”

The “Philippines Day” was conceptualized with the aim to “bring focus to Filipino films that are gaining popularity worldwide” and to introduce new content to hundreds of Filipinos based in Hong Kong, said the FDCP report, quoting Garcia.

Taken from footage captured by the FDCP team during a trip to Leyte last November, “The Heart of the Storm” is an eight-minute documentary that seeks to share with viewers a firsthand account of the recent tragedy.

A portion of the ticket sales of “The Heart of the Storm” will likewise be donated for the relief of typhoon victims, the FDCP chief announced.

During the screening, Santos broke the news of the coming “International Film Commission’s Conference on Climate Change” that the FDCP has arranged to be held in Manila on June 25.

“We hope this important conference will induce more awareness among film counterparts and the audiovisual communities and organizations worldwide of the changing climate patterns,” Santos said. “After all, this is our planet and we are all stakeholders in it. We all need to preserve and protect it, to ensure its wellbeing.”

Santos invited Deneuve, best known for her work in such films as “Le Dernier Métro” and “Indochine,” to grace the Manila conference’s opening day.

Over 600 Hong Kong-based Filipinos attended the red-carpet event and the premiere screenings of the participating Filipino films. They mingled with the Filipino delegates and participated in Q&A (question-and-answer) sessions after each film screening.

Also present when Garcia handed the check donation to the FDCP were actors Piolo Pascual and Joel Torre from “On the Job,” Mimi Juareza from “Quick Change,” and Eugene Domingo (“Kimmy Dora”). Domingo had come straight from the Asian Film Awards, where she was nominated for Best Actress, for Jun Robles Lana’s “Barber’s Tales.”