His mission in Subic is to avoid capture from the Philippine Army’s Scout Rangers
By: Benedict S. Bartolome
Philippine Daily Inquirer / 12:27 AM April 06, 2014 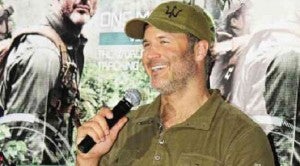 Joel Lambert is a fan of the Philippines but not of its forests. “But the Scout Rangers were awesome. They were good fighters.”

Discovery Channel’s “Manhunt,” a reality series putting a new spin on the game of cat and mouse, stars Joel Lambert, former US Navy SEAL, as he visits various countries around the globe. He challenges different elite military and law enforcement tracking units to hunt him down within a 48-hour period. This tests Lambert’s vast evasion, misdirection and survival skills, while the local hunter force agents treat him as a criminal-like target to be contained and captured before he reaches his extraction point.

“Manhunt” has featured South Africa’s deadly wildlife game reserves, Arizona’s harsh desert conditions and South Korea’s highly populated urban sprawl, but of interest would be Lambert trekking through the jungles of the Philippines. His mission in Subic, Zambales, is to avoid capture from our very own Philippine Army’s tenacious Scout Rangers.

Lambert, warm and full of humor in person, described this mission to be the most difficult among his escapades. “It was the most miserable episode that I filmed. The jungle is my least favorite environment and this was the worst jungle … I’ve come across,” he claimed to much laughter from reporters during a recent press gathering. The swear words he used during his journey through the woods were proof of his misery.

He had various stories behind the scenes as well—some amusing, like his cameraman’s meltdown, or more cautionary like a producer collapsing from heat exhaustion. As for his adversaries, he told theInquirer: “…The Filipino Scout Rangers are f***ing awesome. They are very, very, very good jungle fighters.”

On his thoughts about our country: “I’m a big fan of the Philippines.  Filipino food, Filipino martial arts, and I sponsored a kid here. It really is one of my favorite cultures on the planet, and I’ve always felt a kinship here. But your jungles suck.” That observation was greeted with more laughter as well.

Speaking of which, the jungles of Mt. Sta. Maria proved to be such a hindrance that Lambert couldn’t cover his tracks like he usually does. “The jungle kicked my ass,” he admitted. The booby traps and misleading human intelligence tricks he used were countered by the Scout Rangers as they treat the area like it is their “… own backyard.”

Lambert suffered under the harsh humidity, heat exhaustion, dehydration and, ironically, even a bone-drenching Class 2 typhoon, and the Scout Rangers were always not far behind. But he soldiered on, keeping his wits about, using hunger to keep his senses sharp and living on adrenaline for the last stretch.

“You never stop fighting,” he said. “I never want to stop fighting; that’s the reason why I did this show. It was going to be risky. It’s an impossible situation. But that’s what makes it worth doing.” 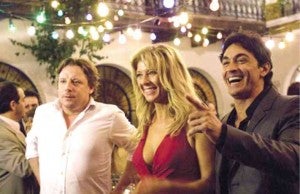 This April, tune in to the Asian Food Channel (AFC) as it presents its original production “How to Make It.” Airing April 9 at 9 p.m., the show features Malaysian celebrity Awal Ashaari, who takes on the challenge of opening his own bistro and discovers that running a restaurant is tougher than it seems.

Wine, tango, soccer and lost love come together in the Danish comedy “Superclásico,” centering on a wine seller facing bankruptcy and a divorce from his wife. The film airs on CinemaWorld on Sunday, April 13, at 9 p.m.