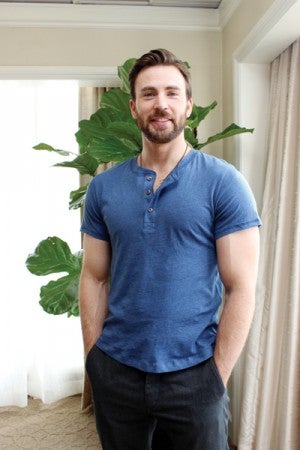 CHRIS Evans during the interview photo by Ruben V. Nepales

LOS ANGELES—“Everything!” Chris Evans exclaimed when we asked what he was looking forward to about shooting “Avengers: Age of Ultron,” in our chat before he left for the set in South Korea. “It’s nice to see those guys again—the whole crew. It’s nice to know that you are making something good. I have been part of plenty of movies where you start filming and you [wonder], is this going to be good? It’s not easy to make good movies. If it were, there would be a lot more of them.

“There’s a real sense of comfort and confidence not just inJoss (Whedon, director), but in the whole Marvel clan,” added Chris, who now sports a beard. He looked relaxed in a blue tee and dark chinos. “A sense of comfort that what you are working on and what you are giving so much of yourself [to] is going to pay you back with a quality film.”

Asked how he kept in shape to get into Captain America’s spandex suit and brandish the star-spangled shield again, Chris replied: “I wish it was some clever thing.”

With a grin that also lit up his blue eyes, Chris made it sound simple, with a touch of humor: “I pick up heavy stuff and put it back down—that’s pretty much it. Everyone’s like, ‘What does it consist of?’ I am like, ‘You lift stuff that’s heavy till you can’t lift it anymore.’ That’s it.”

Looking very buff, Chris claimed that all it took was 30 minutes to an hour each day at the gym. “Everyone’s like, ‘That’s it?’ Honestly, if you give yourself a good 30 minutes or an hour, that’s all you need. You get what you put in. You bust your ass for 30 minutes. You just have to break your muscles down so that when you sleep at night, they just rebuild stronger. So you just have to ‘destroy’ yourself while you are in there and then get out of there. No one likes to be in the gym. I try to make my time in there limited but effective.”

He quipped: “Then I go eat pizza and donuts and drink milkshakes.”

The Massachusetts native said he intensified the workout about two months before shooting begins. “Then you pull the plug about two to three weeks before you wrap. When you see the finish line coming, you are so glad to not have to think about the gym. But we are starting ‘Avengers 2,’ so over the past month, I have been hitting it pretty hard.”

His emphatic answer when asked about the main rule in keeping fit, “It’s not the diet. I wish.”

He continued: “There really is muscle memory. I have worked out my whole life, since playing sports in high school. I have a relatively fast metabolism; with [that] and muscle memory combined, I gain weight fast but lose it just as fast. It’s a fast swing. My body does [adjust] well. I’m getting a little older, though. This time around, more than in the past, I noticed joints hurting and things clicking. I guess that comes with age. That’s [how I know that] Hugh Jackman isn’t human. I don’t know how he does it.”

If he could live forever looking the way he does now, would he go for it? “No,” came his quick reply. “That would be tempting, but aging—that’s how you grow, how you learn. There’s education in aging that I don’t want to rob myself of.”

The 32-year-old, who’s also in postproduction with his feature directing debut, “1:30 Train,” clarified reports that he is retiring from acting to concentrate on directing. “I said that once and it got blown out of proportion,” he said. “All I will say [at this point] is that I really enjoyed directing and I still love acting. Acting is my first love but something in me really responded to directing. I certainly want to direct again, embracing the now and appreciating what is in this moment, and not trying to think about what will be. I am certainly turning my focus on the now, to try and direct a little bit more.”

About “1:30 Train,” a comedy-drama-romance about a woman who rushes to catch a late-night train to Boston but is robbed and gets lost in New York’s underbelly, he said, “We are going to change the title. This is the most unfortunate thing—we are getting all this wonderful press but the title is going to change.”

Chris said it was a challenge to act and direct at the same time. Also in the cast are Alice Eve and Emma Fitzpatrick. “It’s tricky—when you look at things with one set of eyes and then, as you direct, you look at them with another.”

He gushed again, “I really enjoyed directing. It’s the only thing I want to do right now. It’s about understanding and finding your passion. I love acting but acting is not just acting. They don’t tell you that when you sign up. There are a lot of parts of this (acting) business that you don’t know are going to be there. Directing is different. I really enjoyed it on a very deep level. It was nice to feel that connection to something. I hadn’t felt that way in a while. ”

Asked what genre he would like to specialize in as a filmmaker, he answered, “I don’t know yet. That’s the best part about directing. It’s brand new, uncharted waters for me. I am still learning. It’s nice to feel a little inexperienced, a little nervous, to explore some things for the first time.”

He described Korean Joon-ho Bong, who directed him, Tilda Swinton and Jamie Bell in the action/drama/sci-fi “Snowpiercer,” as “fantastic.” He has another film coming out this year, director Justin Reardon’s romantic comedy, “A Many Splintered Thing.”

Chris balked at asking actor-director Robert Redford, his iconic costar in “Captain America: The Winter Soldier,” for directing tips. “He’s a legend. I didn’t feel it was appropriate to ask 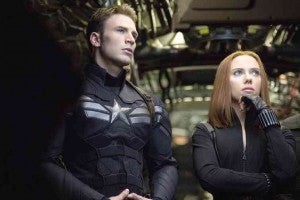 for advice. Had the conversation evolved toward that matter, [I might have]. But I couldn’t just come out of the gate and say, ‘Nice to meet you. So, can I pick your brain?’ It would feel a little bit too forced. Maybe for my next movie, yeah.”

He added: “He’s fantastic, a consummate professional. He showed up on the set—he very easily could have hijacked the set. But he showed up with his lines memorized. He is patient and understanding, a brilliant performer. He made everyone feel wildly comfortable.”

Chris had equally good words about Scarlett, who plays Black Widow. “She was wonderful on the set. She’s [like] a sister [to me] at this point—and one of my closest friends.” He joked, “We have done about 85 films together. It’s old hat now.”

Teased about Captain America being hesitant to reciprocate Black Widow’s feelings, Chris quipped, “Well, because they wrote it in the script. I had nothing to do with that script. I showed up on the set. They said, ‘These are the lines.’ I said, ‘Okay.’ You don’t change a Marvel script.”

Speaking of feelings, we asked if he had noticed any change in the type of women he attracts. “Maybe just (in the) volume.” He caught himself right away and laughed. “Thanks for writing my headline,” we joked. “Oh no!” he exclaimed, still chuckling. (This was our most fun interview with the dude.) “That quote is going to be so bad! My poor publicist is wringing her hands. That’s going to come out terribly. Please, if you print that, use it in context, please—tongue-in-cheek. Damn! I thought I was doing so well.”

Is he old-school about asking girls out? “Yeah, to some degree,” he replied. “When you meet someone, if you only text back and forth, you can’t help thinking … I remember before cell phones, when you had to call a house and ask, ‘Hi, is Rebecca there?’ That’s what you did. In a weird way, I miss that a little bit. I don’t know if I would go so far as to call myself old-fashioned, but I certainly respect anyone who’s going to pick up a phone and make a call.”

Um, who is Rebecca? “Rebecca is nobody, trust me,” Chris said, breaking into laughter again, as he admitted that, as soon as that name came out of his mouth, he hoped that it was really a random one and not somebody who was significant to him.

“My beard is one,” he cracked when he was thrown the question, who or what his real-life shield was. “My hat.” He wore a Toronto Maple Leafs cap when he entered the room and then took it off during the interview.

“But let’s go deeper. My family—because it’s not just protection from people, business and profession. Sometimes it’s protection from yourself. You can be your own worst enemy. So I will say family—the people who knew you before you knew to know yourself.

Yes, that time before the volume of women he attracted was less.

(E-mail the columnist at rvnepales_ [email protected] Follow him at http://twitter.com/ nepalesruben.)