US filmmaker: Manila is sexy

At roughly the same time that the Hollywood movie “The Bourne Legacy” and the British film “Metro Manila” were filmed in the country two years ago, another foreign production wrapped up work—US filmmaker Nathan Adolfson’s “A Thief, A Kid & a Killer (TKK).”

Although not a big-budget project as “Bourne,” Adolfson’s movie featured Filipino actors in stellar roles, like “Metro Manila,” which was a foreign indie production  like TKK. 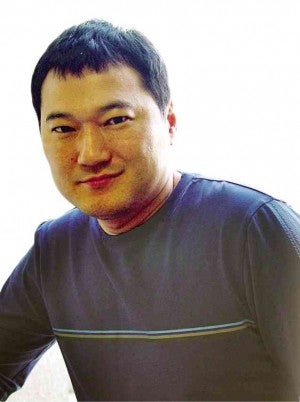 NATHAN Adolfson hopes his film will be seen as a roller-coaster ride by the audience.

While “Bourne” reportedly brought in container trucks filled with equipment, Adolfson and his crew had all of “three crates.” It was a slim but efficient team.

Though TKK was shot with a DSLR camera, Adolfson recounted, he had a top-notch director of photography, Ben Peyser, on board.

Like Adolfson, Peyser shoots mainly TV commercials, most notably for global brands like Nike. Peyser, who shot Adolfson’s 2012 film “Possessions,” agreed to work for much less than his regular fee, for his longtime friend.

“What Ben got for this movie was less than what he usually makes in a day in the US,” Adolfson said. “We went to school together, at the UCLA (University of California in Los Angeles).”

Getting a seasoned DP was crucial because Adolfson wanted to achieve slick visuals.

Adolfson was compelled to set his film in the country. “I’ve been hearing about the Philippines since I was in college,” he recounted. “I live in LA and have lots of Filipino friends. They kept pushing me to visit … Filipinos abroad are very proud of their country.”

On his first visit, he instantly fell in love with the Philippines.

Boracay and the beaches are postcard-pretty, he noted, “but Makati is interesting, too.” He sought to immortalize the country’s Wall Street onscreen.

A decade ago, he was supposed to shoot a thriller here. The project, entitled “The Help,” got stalled, but Adolfson decided to stay put, write and set his next film in the Philippines.

“You can feel the energy of Metro Manila,” he recalled. “Makati is sexy, modern. Fort Bonifacio can be anywhere in the world. It can pass for Seoul or Santa Monica.”

He pointed out, “[This is a] side of the Philippines seldom seen onscreen.” The Manila in TKK is far removed from author Dan Brown’s “gates of hell” or “Bourne” filmmaker Tony Gilroy’s description of the nation’s capital  as “ugly, colorful, gritty, crowded.”

Unlike most Filipino indie films that spotlight the slums and poverty, Adolfson set out to showcase Makati and its affluent environs.

“It’s not a political statement. I am not knocking indie films. Tondo is fascinating, too. There are great stories there, but I am not familiar with them. The Manila that I know is Makati,” he explained.

He seeks to bend rules and cross genres. “In the indie scene, we hardly see hard-core crime drama or heist movies. I wanted to do something new with TKK.”

The Filipino actors got to experience a new way of working under Adolfson’s direction. Constant rehearsals were de rigueur. “Rehearsing shouldn’t be a luxury; it should be a requirement,” he stressed. “The actors realized that things went smoothly [during filming] because we had rehearsed beforehand.”

He spoke highly of his Filipino cast. “They were fantastic. They were enthusiastic because we were doing something different.”

The film has been making the rounds of the international film festival circuit since Cinequest in San Jose, California, which ran from March 4 to 16. 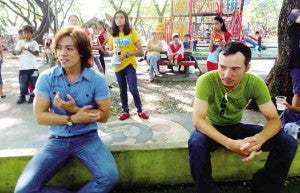 LANCE Raymundo (left) and Epy Quizon take a break during the shoot of a chase scene in a park.

“We have other film fests in North America. Of course, we want to premiere in Asia and bring it back to the Philippines,” said Adolfson, a Korean-American.

He is keenly aware that releasing indie films in local theaters can be an uphill climb. He wants to change the game with TKK.

“Usually, indie films are branded as intellectual … you leave the theater questioning society and your place in it,” he said. “With TKK, I just want Filipino viewers to enjoy themselves. After a stressful week at work, I want them to unplug and watch TKK with a bucket of popcorn and a can of Coke … Hopefully, I’ve made a film that is a roller-coaster ride, from start to finish.”