MANILA, Philippines – After her marriage with basketball superstar James Yap ended on a sour note a few years back, television host and actress Kris Aquino said she and her ex-hubby are starting to become friends again.

In an Instagram post on Tuesday, Kris said that James texted her and offered to split the cost of Bimby’s party.

Kris eventually sent him a text message with the date and details of the cost.

“I replied (with) ‘hehehe’ okay lang, whatever lang he was comfortable with. He said, okay lang para kay Bimb,” Kris said.

“We’re not yet there but we are almost friends again,” the sister of President Benigno Aquino added.

Kris said it was when James acknowledged that she was an “excellent mom” that she started to feel “good will” toward James.

“The good will started because James text me on my birthday acknowledging that I was an excellent Mom,” she said in the same Instagram post.

“So maybe sometimes when we love our kids, we learn to forgive the failure of the marriage and we focus on succeeding as parents and being happy that we’ve all moved forward,” Kris added.

She then told James to bring his girlfriend to Bimby’s party. 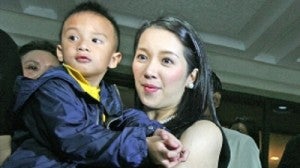 “I said THANK YOU and please invite your girlfriend to join the celebration,” Kris said.

Accompanying her Instagram post is a photo that says “Being friends with your ex shows you two are mature enough to get over the fact that you weren’t meant to be together.”

Kris and James had a bitter falling out since they ended their marriage in 2010.

At one point, in March 2013, Kris asked a Makati court for a temporary protection order against James, to which James responded by asking for a hold departure order against Kris to prevent her from leaving the country with Bimby.

The Makati court eventually issued a gag order to stop the ex-couple from publicizing their problems.

It was just last month when both Kris and James reached an agreement before the Makati court over the custody and visitation on their son.

Yap could visit Bimby once a week starting March, while the custody of Bimby will remain with Aquino until the child turns 18, the court said.

Kris Aquino at peace after reaching agreement with James Yap