Too similar for comfort | Inquirer Entertainment

Too similar for comfort 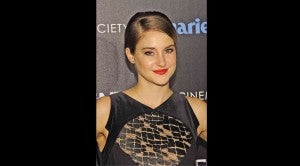 WOODLEY. Does she have what it takes to make her own mark? AFP

Only a few film seasons ago, new movie star Jennifer Lawrence grabbed the show biz spotlight by topbilling hits like “The Hunger Games” and “Silver Lining’s Playbook,” even winning acting citations and awards.

Now comes another young discovery, Shailene Woodley, who’s starring in her own current hit, “Divergent,” bidding fair to enjoy a stellar run as exceptional as Lawrence’s.

Trouble is, she looks and comes across so much like Lawrence that she could have a more difficult time making her own mark!

Another liability is the fact that “Divergent” is again too similar in tone and theme to “The Hunger Games,” because it’s also about young people in a fractured future world being forced to fight to save themselves and their loved ones.

It’s no surprise that new movies like “Divergent” are being inspired by youth-oriented hits like “The Hunger Games.” After all, that youthful demographic has been cited as the biggest sectoral audience for films these days, so it could trigger like-minded follow-up successes at the box office. Unfortunately, when the inspiration is so strong that it may come off as imitation, the bloom is off the rose!

Watching “Divergent” at our favorite neighborhood cineplex last week, we felt bad for Shailene, because she acted like Lawrence’s twin or doppelgänger. She looked younger and chubbier, but the similarity was too obvious to be ignored. Worse, the character she played was too controlled and buttoned-down, as written, to let her artistic energy and spirit flare through.

Luckily for her, she did get an opportunity to dig deeper into her character in a key scene in which her mother (Ashley Judd) died while trying to help her escape.

As Shailene went for the thespic jugular, we saw that she could be a “giving” performer—but such “moments” came too few and far between for that realization to impinge strongly on viewers’ consciousness.

Thus, this early, it isn’t clear if the young actress has what is takes to win her share of acting honors.

As for the film as a whole, we initially admire its believable way of creating its own future universe, in which mankind has been organized into separate “factions” for peace to once again reign on planet Earth.

Later, however, the storytelling focuses for too long on the training of its resident cadres of young soldiers, so viewers’ attention wanders. By the time the movie’s plotting picks up again, it’s too late to enable it to reach the required climactic heights.

Another disappointment is the do-little participation of ace actress Kate Winslet in the film’s desultory proceedings. Winslet is good at most everything she does, but she’s too unrelatably glacial in this sci-fi drama, where she definitely isn’t “the queen of the world!”