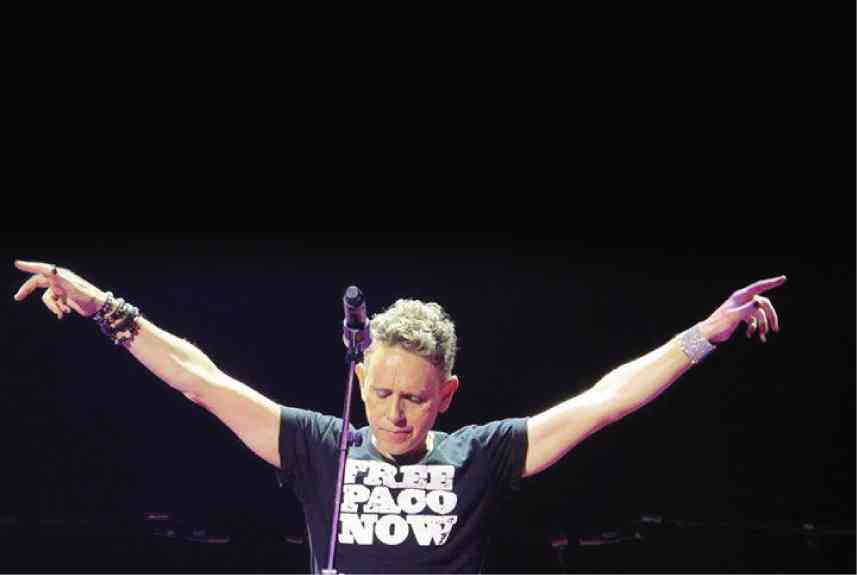 LOS ANGELES—Martin Gore, a founding member of Depeche Mode (cited by the British Q magazine as “the most popular electronic band the world has ever known”), supports the call to release Paco Larrañaga, who is serving a life sentence in a prison in Spain for the rape and murder of the Chiong sisters, Jacqueline and Marijoy, in Cebu in 1997.

Martin, who wrote most of the iconic band’s songs, wore a T-shirt with the message “Free Paco Now” in a series of shows, including two staged in Madrid and Barcelona.

Marty Syjuco, who produced the documentary “Give Up Tomorrow,” about Larrañaga’s trial and incarceration, recalled: “The manager of Depeche Mode got in touch with us [saying] Martin had seen the docu and was outraged. He [asked] how [they] could help. We pointed him to the ‘Free Paco Now’ campaign website. First thing [Martin] did was post a pic of himself in a [‘Free Paco Now’] T-shirt… on the band’s Facebook page, which has 7.1 million followers.”

“Give Up Tomorrow,” well-received in film fests around the world, won two prizes in the 2011 Tribeca Film Festival:  Audience Award and Best New Documentary Director—Special Mention (for Michael Collins).

“We are thrilled and amazed that Martin [is doing this],” Marty added. “On a personal level, having grown up listening to Depeche Mode’s music, I am flabbergasted.” 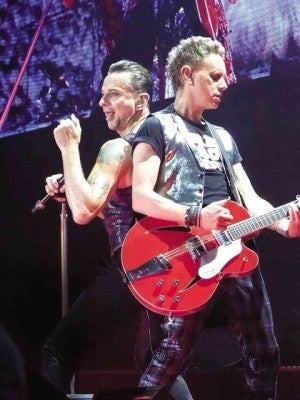 Martin, who sings, plays the guitar and keyboards, among other instruments, composed many of the band’s hits, including “People Are People,” “Personal Jesus,” “Everything Counts” and “Enjoy the Silence.” The group has sold over 100 million albums worldwide.

Marty, whose brother is married to Paco’s sister, wrote the docu with Michael and Eric Daniel Metzgar. Paco, a citizen of the Philippines and Spain, was transferred to a prison in Spain as part of a prisoner exchange treaty between the two governments.

Six of Paco’s coaccused are in prison in the Philippines. The Department of Justice rejected Paco’s appeal for pardon. The Spanish government also appealed to the Philippines to pardon Paco, without success.

Excerpts of our interview with Martin:

How did you get to watch “Give Up Tomorrow”?

I saw “Give Up Tomorrow” on PBS in the United States, where it was available for a short time. I was appalled at the judicial system on view. Rightfully, there was public outrage at the time of the trial and ensuing media frenzy.

I did not have a gut reaction that Paco was not guilty; I knew it. We do not know, from the film, the backgrounds or alibis of Paco’s codefendants, but I imagine that they are equally innocent or at least deserve another fair trial.

What part of the documentary resonated with you on a personal level?

The idea of anyone spending a large part of his life in jail for something that he didn’t do doesn’t, and shouldn’t, sit well with me or anyone. Amnesty International, Fair Trials International, even the United Nations Human Rights Committee [attempted] to right the wrongs, to no avail. The only person who can help now is President Aquino. I hope he reads this and [finds] it in his heart to at least hold another trial, away from the media glare.

You must be bombarded with requests to champion many causes. Why did you choose the “Free Paco Now” campaign?

I am more than sure that there are thousands, if not tens of thousands, around the world who are wrongfully imprisoned. I felt that I should do what I could to [call attention] to it, in the hope that something can be done.

How did you come up with the “Free Paco Now” T-shirt which you have been wearing in your concerts? What has been your audiences’ reaction, especially those in your Madrid and Barcelona shows?

My girlfriend knew how passionate I felt about this, so she had hundreds of T-shirts made for me as a Christmas present. I gave them out to all our crew members (who were not obliged to wear them, of course) and to friends and acquaintances. I have a few left that I am still giving out. I first wore the shirt at the Barcelona and Madrid concerts—the first two shows after Christmas.

After the show, a lot of Spaniards asked me about the T-shirt and what it was about. When I started to tell the story, they stopped me in my tracks, saying that they remembered hearing about the prisoner exchange but assumed that Paco was now out and free! This shows how easy it is to get forgotten and why I feel I need to keep reminding people.

What’s your message to Paco and other people in the same situation around the world?

I don’t feel as though I am in a position to be giving advice to anyone in Paco’s situation. Paco’s words (and the name of the film) are stoic and dignified and say far more than anything I can say: “Give up tomorrow.”

And what’s your message to people in the Ukraine, where the band had to cancel its tour due to the civil unrest, and to people in Venezuela, as they protest against oppression?

It was very unfortunate that we had to cancel our show in Kiev, Ukraine. It was due to take place a few days after government snipers killed dozens of protesters, and just after President Viktor Yanukovych fled the capital. Nobody knew at that time what was going to happen. In fact, we still don’t. Russia has now annexed Crimea and it could go on to occupy more of the Ukraine. It is a complicated situation because although there are many pro-European Union supporters in the country, there are also many pro-Russian supporters, especially in Crimea.

I am not a political analyst. I don’t know what is going to happen. Let’s hope (Russian President Vladimir) Putin stays out of the rest of the Ukraine. He holds more cards in his hand than the West [does] so I am not sure how much effect the sanctions imposed will have on Russia.

The situation in Venezuela is dreadful. It reminds me of Myanmar a few years ago and Egypt and… the list could go on and on. When a dictatorship/government turns its guns on its own people who are protesting peacefully, it is a sign of fear and weakness on the part of those people in power. In an ideal world, all governments should be elected democratically and carry out the wishes of the people. It may take time but ultimately the masses must win.

You just finished a concert in Moscow. Are there additional dates to The Delta Machine Tour? What has this tour been like?

The last show of the Delta Machine Tour was in Moscow (ironically). It was a fairly long tour and we don’t have any plans to extend it at this point. We are extremely fortunate to have the crazy, loyal fan base that we do! Every show was a joy—a real celebration of the music we have made. The crowds love to sing and participate! At times, you can just stand back, watch, listen and smile!

To what do you attribute the continuing appeal and longevity of the band, which will celebrate its 35th anniversary next year?

We often get asked about the secret of our success. Our answer is we don’t really know! If there was a definitive winning formula, I would be managing a few bands!

What have been the highlights of being with the band?

Staying together as a band for so long and making music that I am passionate about are rewards enough! They are the highlights!

Electronic music is more popular than ever. How do you see the music of Depeche Mode evolving in the coming years?

We have never had a game plan, especially not a long-term one. I like to think that what we do happens organically. We just finished a tour so we will take a break for a while. When it feels right, we will get together and talk about the future. We try to keep up with modern technology as much as we can so there will always be an element of electronic technology in our music, but the way that music is made is secondary to the song. We must not forget that! The instrumentation is a means to an end!

Read Next
Confluence of mixed emotions
EDITORS' PICK
Nestlé Philippines’ ‘NESCAFÉ Plan’ bags Grand Anvil at PRSP 56th Anvil Awards
PLDT Home Prepaid WiFi customers now under the care of Smart
WHO: Arrival of vaccines in PH ‘a powerful step’ towards economic recovery, normalcy
Every Filipino home can now be a smart home with realme TechLife
‘Pilgrim of peace’ Pope Francis heads to war-scarred Iraq
QC solon pushes for early voting for senior citizens, PWDs in 2022 elections
MOST READ
Kris Aquino dispels rumors on son Josh getting married, thanks Ogie Diaz for defending him
LTO’s P500-M deal for screws draws scrutiny
Ginebra trades Slaughter to NorthPort for Standhardinger
Wesley So officially a US citizen
Don't miss out on the latest news and information.